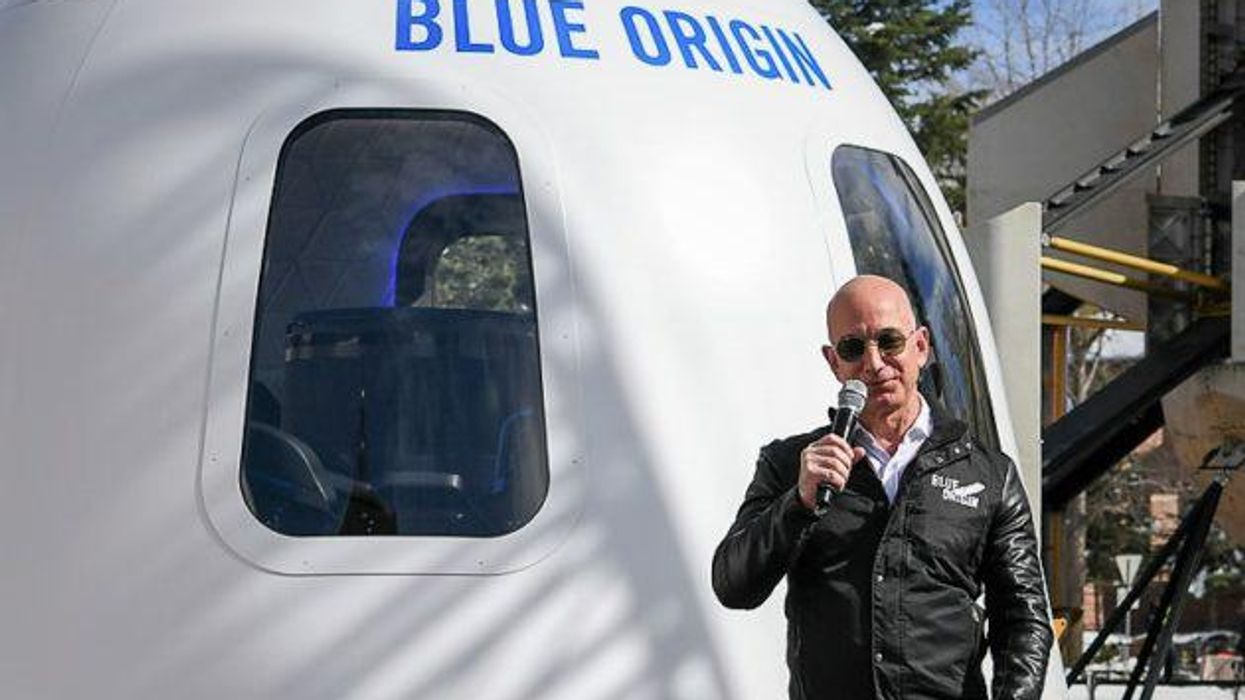 Sir Richard Branson added new fuel to the billionaire space race July 11 when he and his Virgin Galactic crewmates floated in suborbital space.

"To all you kids down there, I was once a child with a dream, looking up to the stars," Branson said before unbuckling. "Now, I'm an adult in a spaceship with lots of other wonderful adults, looking down to a beautiful, beautiful Earth. For the next generation of dreamers, if we can do this, just imagine what you can do."

Can Jeff Bezos top that? We'll soon find out. Amazon's founder is set to go even higher as a passenger July 20 on the first crewed flight for his space venture Blue Origin's New Shepard rocket.

On Tuesday, the Federal Aviation Administration issued its formal approval for New Shepard's launch, which will carry Bezos and three crewmates.

On this special episode of the GeekWire Podcast: the dawn of a new era in space tourism, what to watch when the Amazon founder blasts off next week, and what's next for commercial space exploration.

Listen above, subscribe to GeekWire in any podcast app, and continue reading for edited highlights from Alan's commentary.

What this launch means for Bezos and Blue Origin: I think that there's a little bit of redemption here, because Blue Origin and Jeff Bezos have been working on this and other projects for a long time. And it's a little bit elusive to see the payoff from all that.

He's working on an orbital class rocket called New Glenn, which has been delayed. Blue Origin competed in a couple of high profile competitions for government contracts from NASA or the US Space Force, and they lost out on those.

So New Shepard is really going to be a signal success, and probably the highest success that Blue Origin has encountered in its more than 20 years of existence. If it works as Jeff Bezos hopes it will … then it is a sign that Blue Origin has actually achieved something having to do with human space flight, high-profile space flight. And if they can turn this into more successes, then Jeff Bezos' vision has a much better chance of coming to fruition.

The personal risk to Bezos: There is a risk of death. That's always the case when you have something that's as explosive as a rocket ship that you're dealing with. It was risky for Richard Branson also, even though that rocket plane has been tested. There are three people who lost their lives in the ground test, and one test pilot died in the course of testing SpaceShipTwo. So it is risky.

Blue Origin's New Shepard spacecraft has an escape system if something goes wrong. During the ascent of the rocket, there is a solid rocket motor that is supposed to light up, and push the passengers to safety, in case an emergency occurs. But it's still rocket science, and there are things that can go wrong. Especially with this flight, I think there's a lot more attention to it, because this is the first one to fly with people on it.

What this month means for space tourism: I think it's a turning point. For a long time, I had talked about the two-year rule in private commercial space flight, that the era when regular folks fly in space always seems to be two years away. But now it's less than two weeks away, perhaps. So I think that's a big deal. It's a big deal for the business of space flight.

Strangely enough, I am feeling like this is just becoming a business, and for people who are well-versed in science fiction and all that, and love Star Wars and Star Trek, maybe it loses a little bit of an appeal, because now, it's just a business, and the filthy lucre is entering into the picture.

I'm of two minds about that. I'm kind of sad that it's no longer science fiction, strangely enough. But I guess the day that we all had been thinking was coming some day down the road is really approaching its dates on the calendar.

This article originally appeared on GeekWire