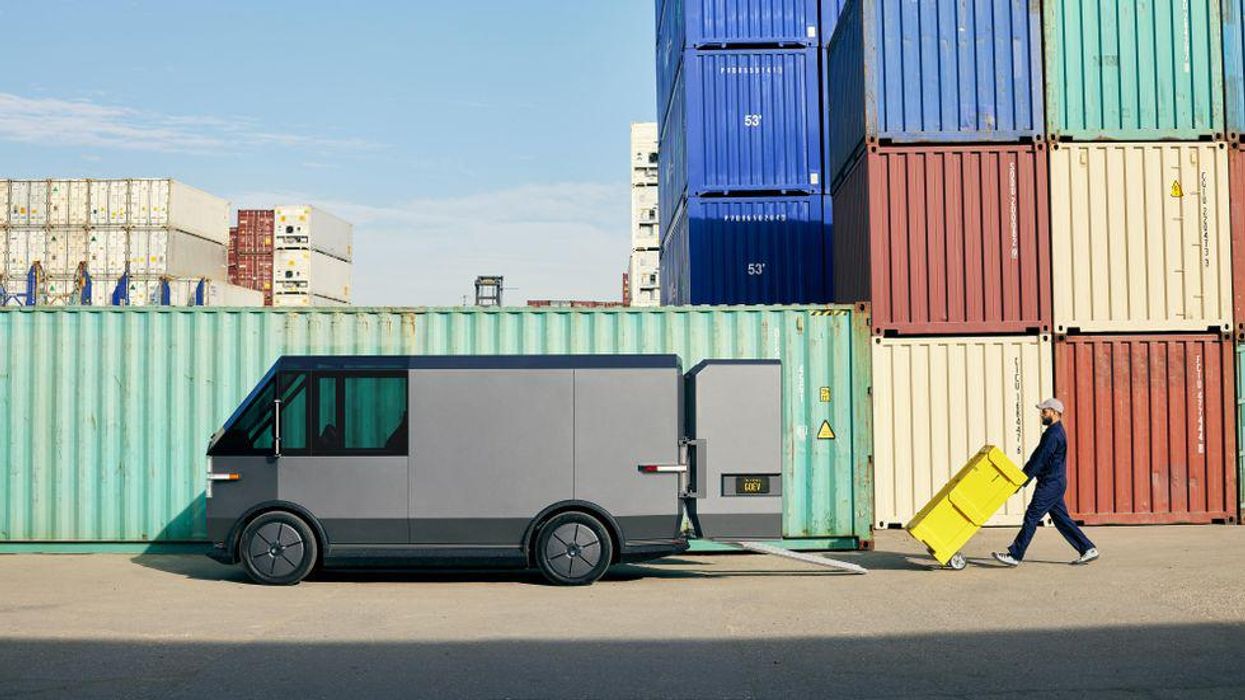 Two months after a Canoo co-founder and CEO resigned, the Torrance-based company is looking to bounce back with plans to build an Oklahoma manufacturing plant and clinching a European contract for its electric vans.

Chairman and newly instated CEO Tony Aquila announced Thursday at Canoo's "investors day" that the company has secured a contract manufacturer in the Netherlands to begin assembly of the first 1,000 Canoo Lifestyle Vehicle vans in late 2022.

Canoo also announced plans to build a plant in Pryor, Oklahoma where its vehicles will be assembled and eventually exported. It's targeting 15,000 units in 2023. Oklahoma Governor Kevin Stitt was in attendance at the event, which was held at the Texas Motor Speedway in Fort Worth, Texas.

"Let me tell you, Oklahoma is a step above Texas," Stitt joked while on stage with Aquila, who has a ranch in Texas.

The plant will be on 400 acres and about 45 minutes from Tulsa and four hours from Canoo's executive hub in Texas. The company received a $300 million incentive package from the state of Oklahoma.

A working prototype of the company's customizable electric vehicle platform was driven onto the stage before the speakers appeared. Its frame will underpin Canoo's van and pickup, allowing them to share most of the same components, despite having different bodies.

The basic model of the company's Lifestyle Van starts at less than $35,000 and rises to nearly $50,000, before EV incentives.

Much like Manhattan Beach-based Fisker's agreement with Magna Steyr in Austria, Canoo is looking to its contract partner not only to produce its cars, but guide them on the manufacturing process as well.

Its Dutch partner VDL Nedcar in Born operates in a plant built in 1967 that was once owned by Volvo and then Mitsubishi Motors. Since the manufacturing's parent company VDL Groep took over the facility in 2012, the plant has signed a deal with BMW Group to produce various BMW and Mini models. That agreement is set to expire in 2024.

"Nedcar can build as many as 100,000 vehicles for Canoo if needed,'' Aquila said, but added that the partnership is primarily to get the first deliveries fulfilled and learn the manufacturing processes needed for the Oklahoma factory.

Canoo also has plans to sell its vehicles in Europe, where electrification has been more broadly embraced, thanks to mandates and incentives in countries such as Norway and Germany. Aquila said the van could be available in some European countries shortly after the first Nedcar-built models are produced, and that vehicles would eventually be exported from the United States facility.

Canoo will face stiff competition from Ford. The automaker unveiled the F-150 Lightning pickup truck, an electric version of the best-selling vehicle in the country, last month. Prices for it are expected to start at about $41,000.

Canoo has gone through a series of changes since it went public last year in a $2.4 billion SPAC deal. A 2020 agreement with Hyundai Motor Group to cooperate on vehicles based on Canoo's platform was effectively declared dead in March, with Aquila telling investors it would get out of the contract engineering business and primarily focus on products for commercial users.

Aquila brought in a raft of new executives, including some former Daimler and Mercedes-Benz USA officials, and Peter Savagian, who worked on the General Motors EV1 project in the 1990s. But the sudden leadership and business plan changes prompted the U.S. Securities and Exchanges Commission to open an investigation into Canoo, which Aquila revealed a month ago.

Rumors of a collaboration with Apple also came to nothing. Canoo co-founder and former CEO Ulrich Kranz, previously of BMW and Gardena-based Faraday Future, took a job at the Cupertino tech giant this month to shore up the car project.

Aquila acknowledged the consolidation that will eventually occur with EV startups as the market gets saturated with plug-in vehicles. He hopes the new team that's been assembled will keep the company nimble and efficient.

"Consolidation is going to happen, he said. "I like to buy companies but I don't like to be bought."