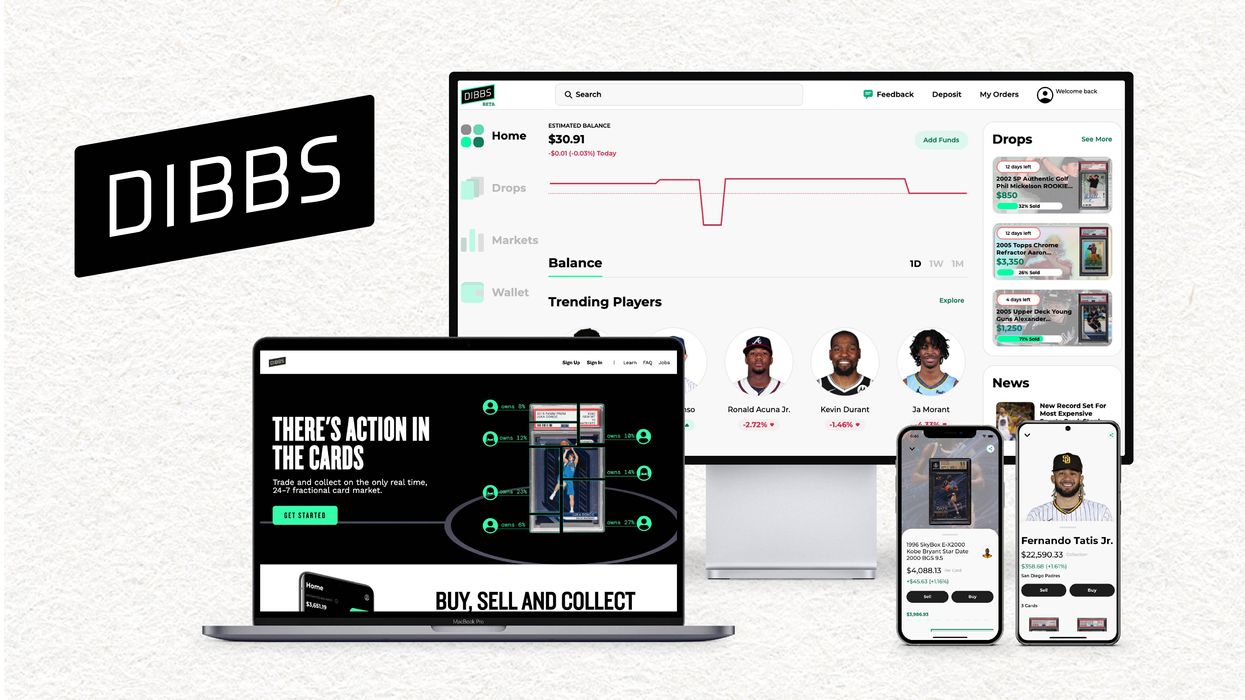 What if you could own a small portion of a Mickey Mantle or Stephen Curry rookie card? A new marketplace for sports cards and NFTs wants to allow users to do exactly that.

El Segundo-based Dibbs, which brands itself as "the only real-time fractional sports card marketplace," secured a $13 million Series A round this week. Foundry Group led the round, with several superstar athletes such as Chris Paul and Skylar Diggins-Smith also participating.

Since last year, the sports card trade has reached record highs — in some cases, outpacing stock markets — with all-time high trading prices and a significant increase in online trades. The industry has even reeled in venture capitalists, including L.A.-based VCs Carter and Courtney Reum.

Alongside the growing interest in investing in physical cards is a booming market in trading sports-related digital tokens. The asset class known as NFTs (non-fungible tokens) has been expanding quickly, with marketplaces like NBA Top Shot making millions and upstarts like BallerTV minting tokens for high school athletes.

In a way, Dibbs combines these two industries. Traders can send their cards to Dibbs, who create digital representations of the card to be minted and sold as NFTs. While the card sits in a highly secure vault powered by PWCC Vault, the seller can profit off of the sales, and Dibbs takes a trading fee.

Dibbs sells these collectibles as fractional NFTs, meaning users do not have to contribute large amounts of money to participate in trades. Instead, they can own fractions of NFTs, which can be bought and sold on the platform.

So called "smart contracts" baked into the blockchain algorithm give buyers a full NFT once they've accumulated enough fractions. At that point, the user can either have the physical card sent to them or they can keep the full NFT to trade on other marketplaces.

"More than anything else, [the NFT craze has] gotten people to think about collecting differently," said CEO and co-founder Evan Vandenberg. "Before it was this kind of physical attachment, and I think people are now much more comfortable separating that possession from ownership concept and being able to do these things in a digital form."

Vandenberg said the appeal of owning a fraction of a sports card NFT lies in not only the affordability but also in the potential for this specific market to grow.

"Sports cards have been around since the 19th century, so we're talking about 100-plus years of actual collectability, of value," he said, adding that he hopes to see the market for digital cards grow as well. "I'm the biggest fan of NFTs. I hope they really have longevity."

The fractionalization of NFTs has stirred up controversy in the crypto world, prompting concerns that fractions of NFTs could at some point be reclassified as securities — meaning they would be legally subject to regulation. At the Security Token Summit last March, SEC Commissioner Hester Peirce said of fractionalized NFTs, "You better be careful that you're not creating something that's an investment product. That is a security."

Such talk doesn't faze Vandenberg, who said Dibbs does not see their fractional NFTs as securities.

"Where fractional ownership — whether ownership of a network like Ethereum, or a particular NFT — can be accomplished in a transparent, open-source manner, without making purchasers beholden to the management efforts of the promoters, we see that as a win-win."

According to Vandenberg, tens of thousands of people signed up to the platform's waitlist before launch, and over 110,000 trades were made on Dibbs while it was in closed beta, which ended earlier this month.

The platform is now available to anyone over 18 in the U.S., and nearly 20,000 non-U.S. customers remain on its current waitlist, Vandenberg said.