Forget Opioids, Virtual Reality Could Be the Future of Pain Management 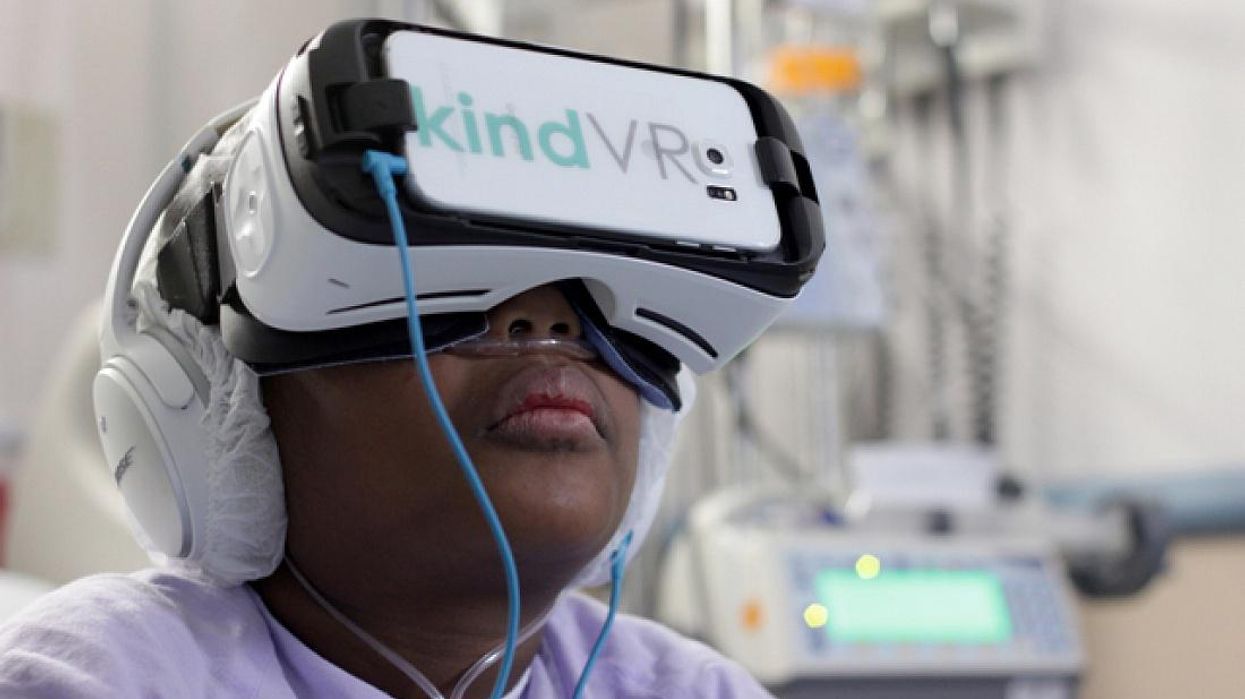 It’s hard to overstate just how painful a process treating burn victims is – for burn victims, air itself is excruciatingly painful. They have to undergo weeks of undressing wounds, cleaning the tender skin of debris, slathering the area with ointment, and redressing it with new bandages, and it is considered one of the most physically painful treatments in medicine. To combat this, most patients rely on consistent and heavy opioid usage.

But in 2008, University of Washington researchers published the first study of its kind using virtual reality (VR) to mitigate the use of the highly-addictive drugs. The researchers replaced the clinical hospital setting with a computer-generated snowtopia where patients could throw snowballs with penguins and snowmen through a VR headset as doctors washed the treatment area. It worked, and the study concluded that VR could replace part of an opioid dose.

A decade later, VR medicine has taken off, spawning a clutch of companies and a new field of study for what is considered one of the most promising and powerful noninvasive tools to treat pain. It’s now a growing part of an $885.7 million VR health care industry.

In the eyes of Jeffrey I. Gold, a pain management doctor at the Children’s Hospital Los Angeles, it’s the future of medicine, as virtual reality has the potential of eliminating the need for billions of dollars worth of drugs.

If Gold is right, as researchers are increasingly finding, this could have a ripple effect across the healthcare industry eventually lowering health care costs as patients rely less on drugs to offset pain.

“That’s really where VR needs to go, is into the place where you can start reducing the need for certain types of medicines that may have side effects.” Gold said. How VR Works to Mitigate Pain

Conventional pain management techniques rely on distractions like blowing bubbles with younger patients or administering pain relievers or sedation. Unlike those, VR has the unique ability to manipulate how the brain processes pain by engaging the senses with powerful immersive experiences.

Gold published a study looking at how VR impacted pain in children. Researchers gave children aged 12 to 17 who were getting blood drawn VR headsets and instructed them to play a game made specifically to soothe pain. Once they put on the set, health care workers drew blood.

They then compared the experience to children who were given traditional distraction methods like bubbles or reading a book, and soothing techniques.

The study found children who used VR during their procedures felt less pain and anxiety than children who didn’t.

One way to think about pain is like an “alarm” the brain sets off. VR directs the brain to set off more relaxing “sounds” in the form of a visual and audible world that forces the senses to experience something else. This drowns out that “alarm” created by the pain. The brain, effectively, does not register the needle placement as as painful as it would be without VR.

The study confirmed what researchers have been seeing for years. But what excited Gold was its potential for children: By making procedures more engaging and less painful, children with chronic conditions may become less fearful about treating their condition, he said.

“For a child to have a positive experience on a routine procedure, that can be a game changer for that kid.”

Other researchers looking at the use of VR are finding that not only does the technology engage the patient’s senses, but in some cases it can act as a support network, much like a family. Another study by Cedars Sinai Los Angeles used VR to assist women going into labor with painful contractions. Researchers put a headset on women in labor showing them soothing animated scenes of nature that pulsated, almost as if the elements were breathing. A calm voice used words of encouragement to help the mother through contractions.

Women who used the VR reported lower levels of pain and anxiety, much like the children.

“What I think was so impactful about this particular intervention, actually, is that what they were hearing was very much the same things … you might hear from a doula” said Dr. Melissa Wong, maternal-fetal medicine specialist at Cedars-Sinai Los Angeles who led the study. ‘A Pharmacy of VR’

Wong’s study at Cedars-Sinai indicated VR could be an alternative to epidurals or nitrous oxide – two common pain management solutions used during labor. But, even more than that, it pointed to a slew of history that shows pain is not just an acute or chronic sensation in the body that causes your brain to raise alarm, it’s also the environment around you.

Wong said one of the strongest indicators of whether or not patients ask for epidurals during labor is whether or not they have a birth support person in the form of a partner, family member or doula. Patients that don’t are more likely to need an epidural.

“So it’s suggesting, again, that [pain] is sort of the entire way in which everything is being approached, rather than just literally the pain fibers,” said Wong.

In other words, pain isn’t simply a feeling. It is also a patient’s support system, surroundings and mental fitness. By taking patients out of a clinical hospital setting of linoleum floors and wheeling carts and into a magical virtual world that has its own soundscapes and therapeutic guides, their pain can appear to be far less than what it might be.

Brennan Spiegel, a doctor at Cedars-Sinai Los Angeles who oversees virtual reality programs, coined “a pharmacy of VR” — the idea that VR therapies should be created to help specific situations, like going through labor, dressing a burn wound, undergoing chemotherapy or having an anxiety attack.

But the industry is still young and many of the devices have yet to gain full Food and Drug Administration approval. Still, there’s growing demand.

Companies Are Getting Involved

Companies like seven-year-old Alameda-based KindVR are using virtual reality programs to soothe pediatric patients before an MRI and calm them before an operation. XRHealth, a five-year-old company based in Massachusetts, offers a host of applications designed to treat physical immobility and mental health.

And the six-year-old Los Angeles-based AppliedVR developed a suite of VR-based “video games” meant to soothe anxiety for veterans and treat acute pain for people giving birth and burn victims. The company has raised around $34 million to date, the most any startup in the chronic pain market has raised, and valued at over $67 million, according to Pitchbook.

Following the idea of a ‘pharmacy for VR’, AppliedVR has two opioid-sparing treatments — one for patients to use to help with acute pain, and one for chronic pain. The effects of chronic pain are often long lasting stress and a feat of moving, which is why the company incorporates cognitive behavioral therapy into the treatment.

Their chronic pain product is EaseVRx, a VR device used in an eight-week program that takes patients through different educational and training modules to explain to them how stress can affect pain, how they can avoid stress, and how to utilize breathing and acceptance-based therapy to reduce pain long after taking off the VR headset.

Laura Garcia, director of research, design and product innovation at AppliedVR said the company found that patients are able to utilize the benefits of VR up to six months after taking off the headset.

“While you’re in the headset, you’re able to learn your skill sets and change your brain so that you’re able to cope with the pain differently,” she said. “So imagine having a pill that gives you benefits and relieves [pain] for the time that you use the pill for, but also six months after.”

Correction: An earlier version of this misidentified EaseVRx and misstated the length of its VR training program.