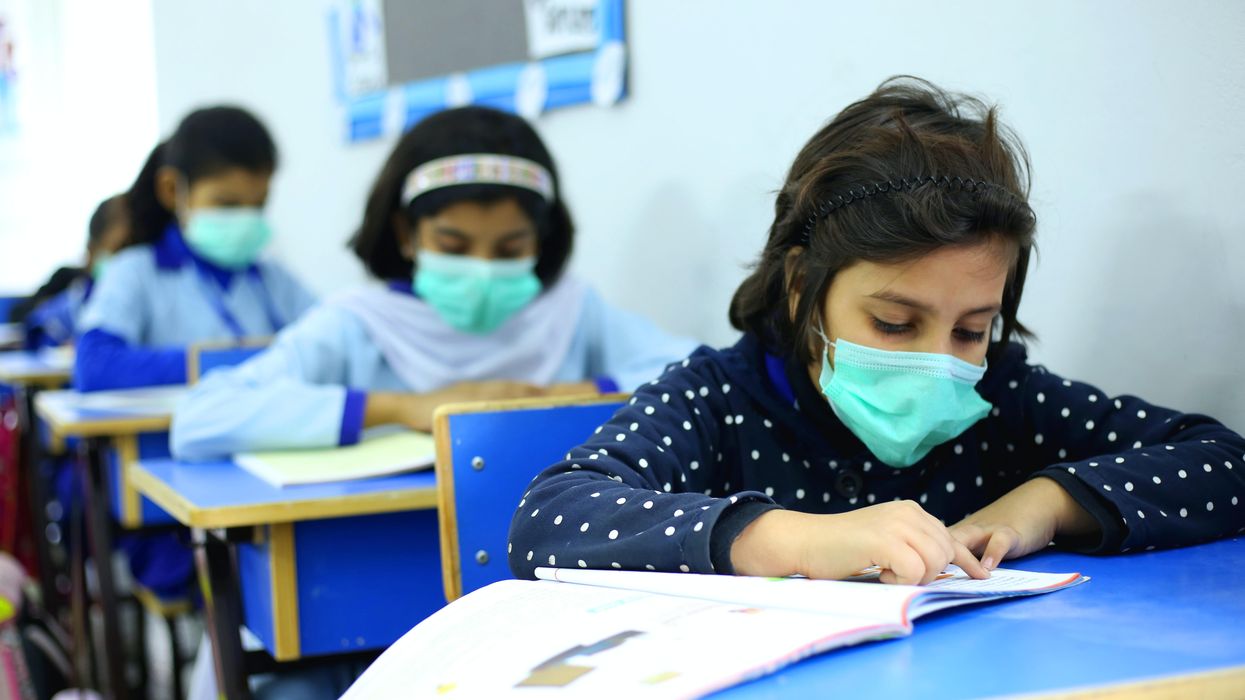 Jorge A. Caballero agonized over whether to send his toddler to preschool, but ultimately decided he couldn't teach his child how to socialize and share with other children at home. On the third day of school, he received the news all parents dread: His child was in contact with another who tested positive for COVID-19.

He now regrets that decision and doesn't know if he'll send his toddler back.

"We're setting ourselves up for a major wave that starts with children," he said.

Caballero, co-founder and head of data insights for Coders Against COVID and a clinical informatics researcher, should know. For more than a year he's been poring over COVID data and posting aggregated metrics from the Los Angeles Unified School District (LAUSD) and other large school districts on his Twitter feed, @DataDrivenMD.

And just over a week ago, LAUSD parent advocacy group Parents Supporting Teachers tapped Caballero to help them get data they were asking the district for for months.

Those cases do not appear to be contracted at schools, but according to the parent group, district data shows there were 2,862 active COVID cases among students and staff as of Sunday night.

LAUSD has its own dashboard where parents can search for their child's school and see how many students or staff tested positive for COVID and how many cases were linked to a "school-based transmission." It also shows the infection rate for the community of schools and the community identified by the L.A. County Department of Public Health.

But the dashboard doesn't show district-wide aggregated data like the figures reported Sunday. That's where Caballero stepped in.

Caballero wrote a script that scrapes the district's data, and every morning he turns it over to a group of parents who've created a public Google spreadsheet that shows the rates district-wide, not just the individual school. It also creates a record of what the numbers were each day so parents can compare the rates and see trends over time. The district data offers just a snapshot of the data for that day. It helps parents "better understand and contextualize COVID-19 cases across our schools and neighborhoods," the group said. 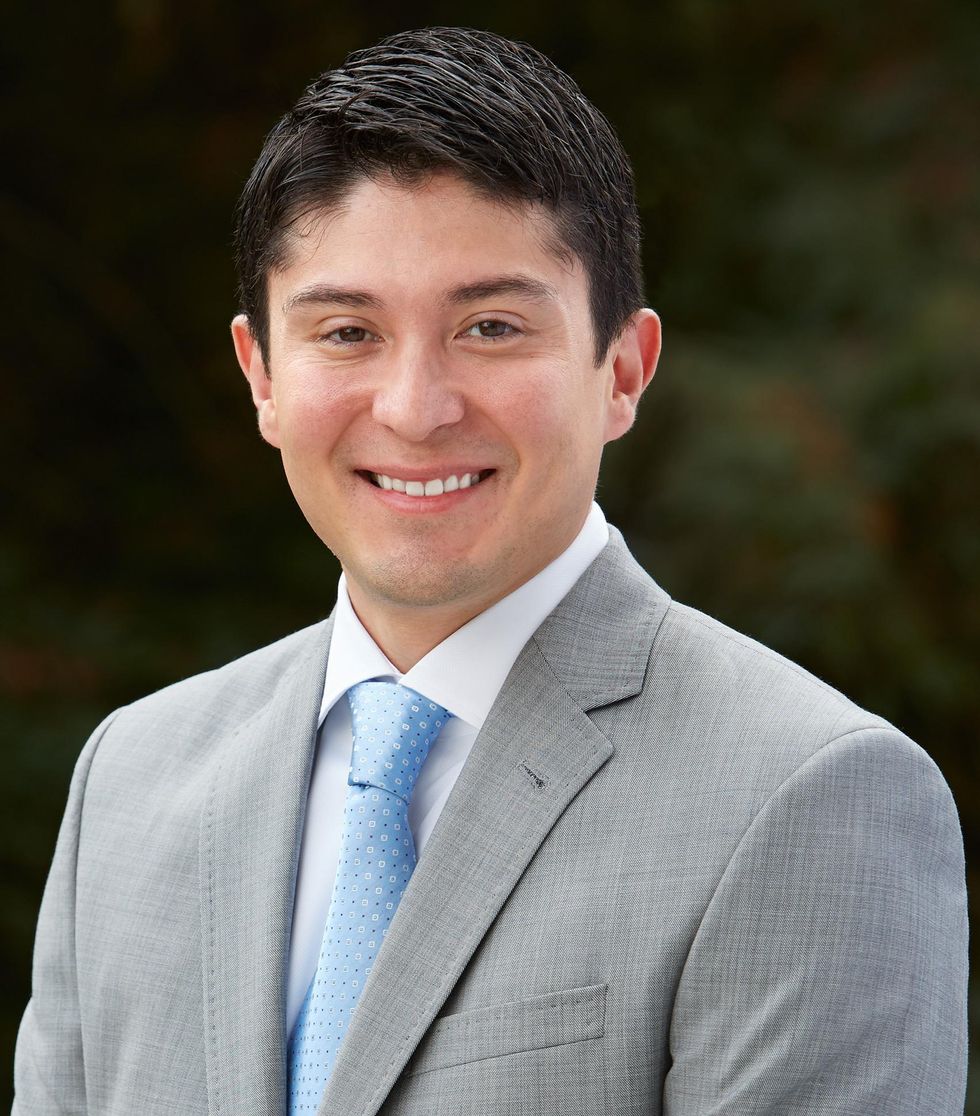 "He has been a godsend," said Jenna Schwartz, co-founder of Parents Supporting Teachers. She quickly realized how monumental the task was after members of her group began to input the data for nearly 1,000 campuses by hand. Then, they found Caballero. "None of this would have been possible without him."

LAUSD has such robust data about positive cases because it requires every staff member and student to be tested weekly, regardless of their vaccination status. That is the strictest testing protocol of any major school district in the nation.

We talked to Caballero about why it was important to release this cumulative data.

What prompted you to start pulling the LAUSD data yourself and posting it on Twitter?

The reason I have an interest in what's going on at LAUSD and even New York City schools is because what they do ends up having a ripple effect across the country. We have a child who is too young to be vaccinated. We are in a precarious position where we can't safely send them to school because the community case rate is so high across the country [and] there is a known risk of our child getting exposed. In fact, we were just notified yesterday that they were exposed.

In the absence of effective public health measures, we will continue to have exposures and outbreaks that have collateral damage in that they harm people that are either immunocompromised or children who are too young to be vaccinated.

From my perspective of over a decade of health data expertise and analysis, it's in the data. We cannot afford to have people choose not to be vaccinated if we hope to keep schools open safely, if we hope to regain any sense of normality moving forward.

The moment that you put unvaccinated children and staff in an enclosed space for hours at a time, with the highly transmissible delta variant, you're going to have clusters of cases almost immediately.

The numbers don't add up. We're setting ourselves up for a major wave that starts with children.

Do you fault LAUSD for not having effective contact tracing, specifically, or are you saying in general that's a problem we're having at the national level as well?

It's not LAUSD's fault that we squandered the summer. We should have done better at a national, state and local level at recognizing the clear and present threat that was and is the delta variant.

We knew what was coming our way. Everything that's making headlines in the U.S. now made headlines in England, Scotland, the U.K, Israel, India, New Zealand, Australia.

We did fail at the policy level to adapt back-to-our-school policies to this new reality. It's taking a lot of effort to overcome the inertia of all of these existing policies and to move the Titanic in a direction that's going to steer away from that iceberg.

We all worked as hard as we could. We were at mile 23 of a marathon. Delta variant set us back to around mile 13. We have to adapt and we will make this into a relay race, we will find a way to get to the finish line, but we have to recognize that there needs to be a change in the strategy. We can't keep doing what we were doing.

Are there tech issues that you're seeing with the LAUSD dashboard?

You can tell that the folks at LAUSD are struggling with the dashboard. There's just little quirks shown up over the course of the past two weeks. As a software engineer myself, I can tell that they're having difficulty getting their hands around the data.

In LAUSD's COVID dashboard and in your database you have the data divided by the communities identified by the L.A. County Department of Public Health and include the community case rate reported by the county. Why is it important to compare infection rates at schools to the community as a whole?

Comparing the case rate at the individual schools to the broader community is one way to identify data gaps and/or the need for improved contact tracing. For nearly every facility, the school-based case rate has been higher than the community and county case rates. This observation was the first indication, to me, that LAUSD was going to run into problems. When the school-based case rates are significantly higher than the community and county rates, this suggests that the community and county-level data is underestimating the actual case rate. For example, asymptomatic persons aren't getting tested and it could mean that school-based transmission is under-reported due to inadequate contact tracing resources. Before school started, the former issue was dominating the disparity in rates, but the more time that unvaccinated and/or unmasked kids spend in classrooms, cafeterias and hallways, the more that the latter comes into play.

Why is it important to have aggregated data rather than just data by school?

Detecting hotspots requires the ability to zoom in-and-out of the data across geography and time. Say that you're a family with a child under 12 who is in a social bubble with families that have kids in high school: You'd probably want to avoid having one of those high schoolers babysit when the case rate for the community of schools is trending upward.

Dr. Anthony Fauci, director of the National Institute of Allergy and Infectious Diseases and the chief medical advisor to the president, said he hopes we will have "some good control" over COVID by spring 2022 if people get vaccinated.

We can absolutely change that. It just requires the political will to acknowledge the problem and to be willing to make those tough decisions.

Would you support a federal vaccine mandate?

Absolutely. There's talk about a state level vaccine mandate and I'm very supportive of that. We are in a public health emergency. Based on the data that I'm seeing, it makes absolute sense and it would be quite frankly political and public health malpractice not to consider a vaccination mandate for those who are eligible for a fully approved vaccine.

You decided to send your toddler child to school and that's where they were exposed?

Just like any other set of parents, there's only so much you can do to help your child develop especially at this early age. There's no way two adults can teach their child how to share, how to socialize, how to resolve conflict.

We made the very difficult decision to try to send our kiddo back to pre-school and we thought we had everything covered. They spent no more than 15 minutes inside of a classroom, because we picked them up late and dropped them off early. We bought them HEPA filters, we made sure the windows were open and the staff were fully vaccinated. We did everything we possibly could within our control, and then some.

Three days into the school year, we received a notification that our child was exposed on the first day of class. We find ourselves in a situation that is all-too-common across the country, certainly across the state and definitely across the L.A. Unified School District.

Do you think you'll send your child back?

I didn't want to send them at all, but we had to for their sake. We needed to send them to school. I'm not certain that we will send them back. In our case, it seems as though somebody sent their child to class while waiting for test results. That is a frustratingly common scenario based on what my pediatrician friends are telling me. That's a betrayal of trust that we had placed on the other families in the school. We haven't decided yet, but right now, I'd say absolutely not.

This interview has been lightly edited for brevity and clarity.