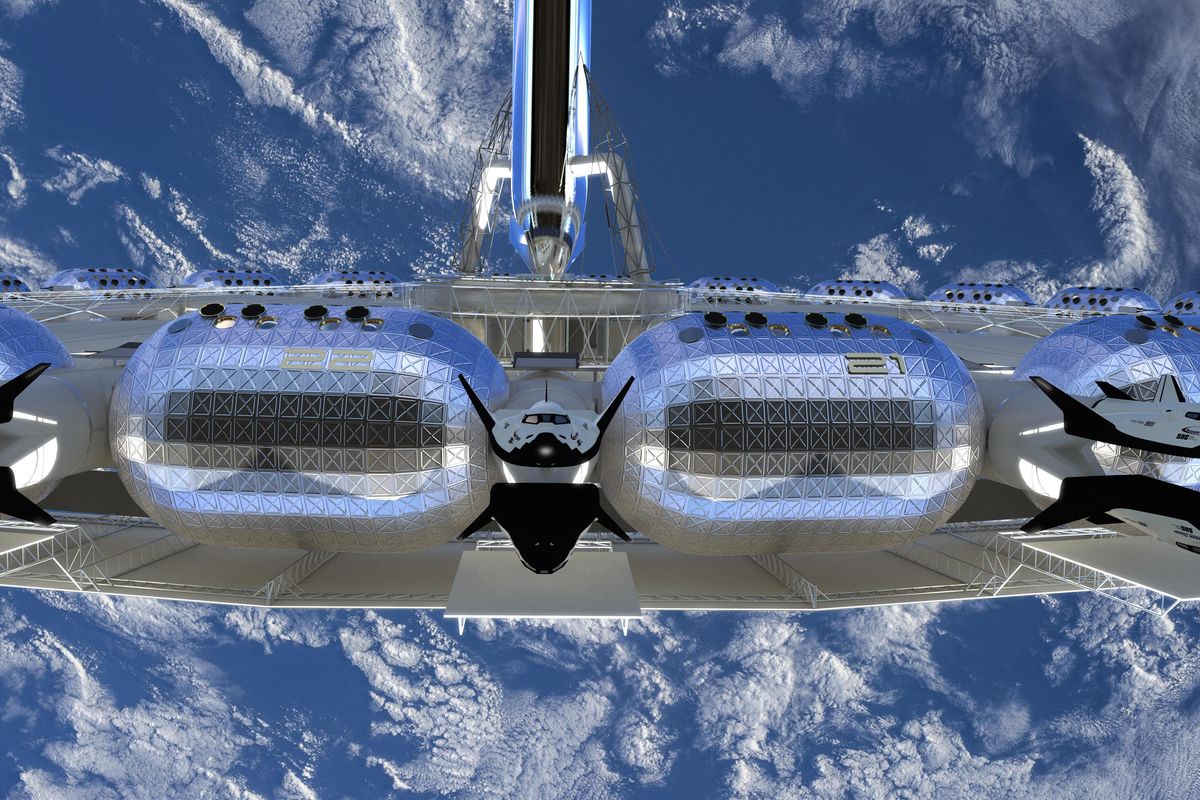 With intercelestial travel fast approaching for people who can afford it, Fontana-based Orbital Assembly Corp. is already plotting out a hospitality industry.

Orbital is working on autonomous robots that can build luxury hotels in space and could eventually create a floating interstellar cruise ship.

Orbital Assembly CEO Rhonda Stevenson said that while the idea might seem far-fetched, proving that the technology works on the ground is the first step to convincing people to use it in outer space.

The company wants to “create large space structures that simulate gravity” and serve multiple uses — residences, hotels, business centers and bars, she said in an email.

Already, the space tourism industry is taking off. SpaceX recently announced it’d sell four tickets to launch private citizens into space as early as 2021 — and Amazon and Blue Origin founder Jeff Bezos said he’d fly into orbit himself as soon as this July.

Orbital hopes that by 2027 it can erect an operational space hotel atop a vessel that can spin fast enough to maintain gravity inside. 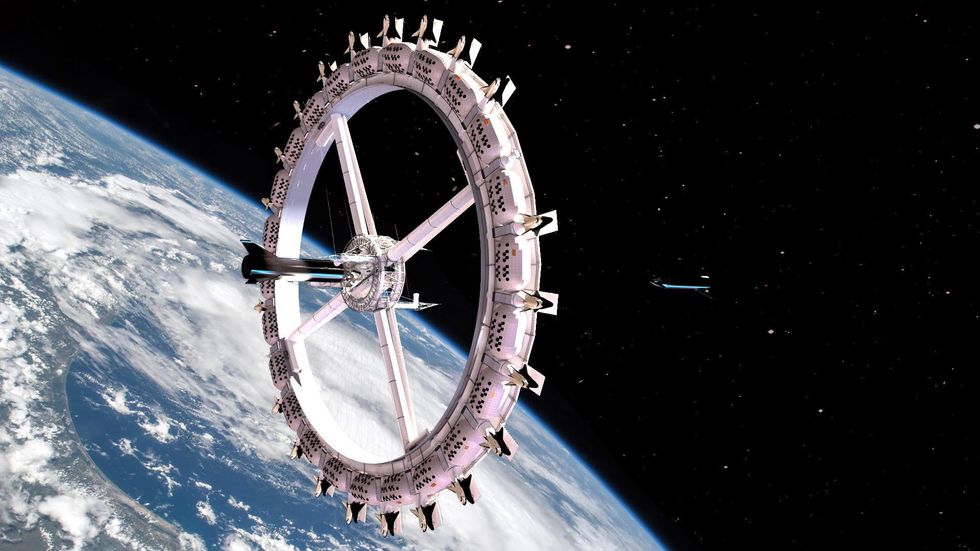 The structure was originally conceived as the Von Braun Space Station, after Nazi rocket scientist Dr. Wernher von Braun. A company spokesperson said they changed the name to the Voyager Station for “obvious reasons.”

“I hate to compare us to Elon Musk, because I see him as a once-in-a-generation type of figure, if that,” said Tim Alatorre, chief operating officer and chief financial officer. “But what he did is he saw a problem that nobody was solving, and so, that’s what Orbital Assembly is doing. I think we see a problem that nobody’s solving. We don’t have low-gravity stations in orbit, we don’t have the ability to build large structures economically and easily in orbit.”

“There’s no engineering reason for that. It’s just a matter of will, and getting all the business and the commerce components in place to make it happen,” Alatorre added.

Alatorre also added that having a robot build equipment in space could be far safer than asking humans to do spacewalks.

“In order to get humanity into space, we need to be able to build things more economically,” Alatorre said. “The International Space Station was put together primarily by astronauts in spacesuits going out into the vacuum of space manually and that’s just not cost effective. But it’s also a danger we think about; it’s incredibly dangerous and you have to have a lot of training.”

Orbital Assembly isn’t the first company to come up with the idea of a hotel beyond the stars. Almost as soon as human spacefaring began in 1961, people have floated the idea of living, working and chilling in outer space. It’s only been recently, as SpaceX, Blue Origin and other private space companies have made strides towards private space travel that these projects have become more focused.

Orbital is conducting a June 19 demo of the technology where it will assemble a truss the size of a football field at its Fontana warehouse. After the event the company will post videos of the robots in action. 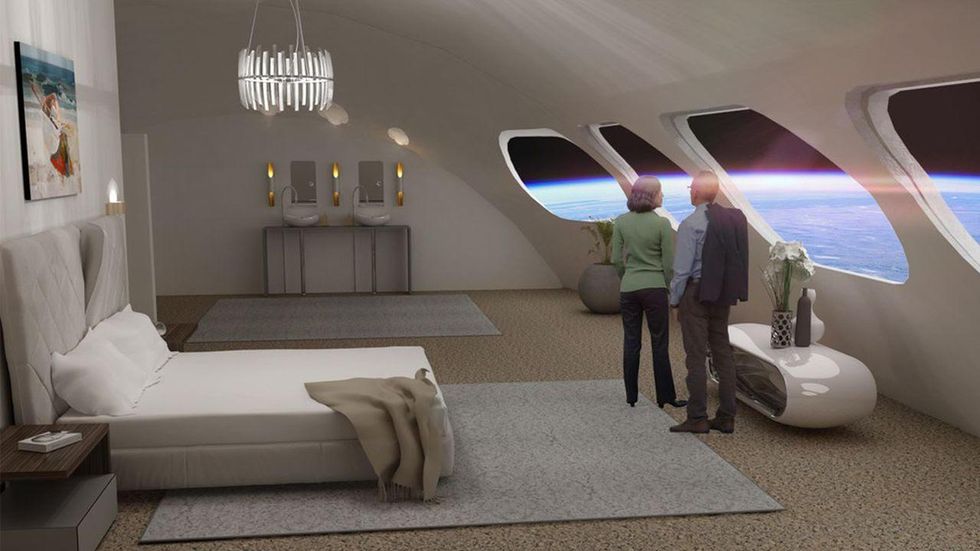 Alatorre also said he hopes the demo technology will be recyclable or something Orbital Assembly can resell.

“We’ve had [it] in pieces in storage throughout Southern California, and we haven’t had a space large enough to be able to assemble it,” Alatorre said. “Since we’ve announced this, we actually have a number of different potential clients who are interested in using this truss-building technology for other purposes as well; So even though it’s a demonstrator, we’re hopeful that we’ll be able to repurpose it and use it for some other clients.”

After the technology is operational, the next step is launching the DSTAR into low-Earth orbit by 2023.

There’s a myriad of challenges that Orbital Assembly could face — and is anticipating — on its way to building an abode in the stars. Firstly, there’s the money: Stevenson said the company needs to raise $200 million to fund its mission in 2023.

So far, Orbital Assembly has raised just $1 million since it launched in 2019 from investors through an equity crowdfunding effort led by Net Capital.

Funding issues have plagued other skyward-looking startups before: a Houston, Texas-based company called Orion Span was hyped up to launch a space hotel project by this year, but closed shop before it took off. The company was forced to refund the $80,000 fee it charged customers to pre-order a ride to their space hotel.

Alatorre said the first two parts of the Voyager station could be “at max about $2 billion.” He added that in total, “our current estimates for Voyager station are less than $8.6 billion” and added, “keeping in mind that the station is significantly larger than most.”