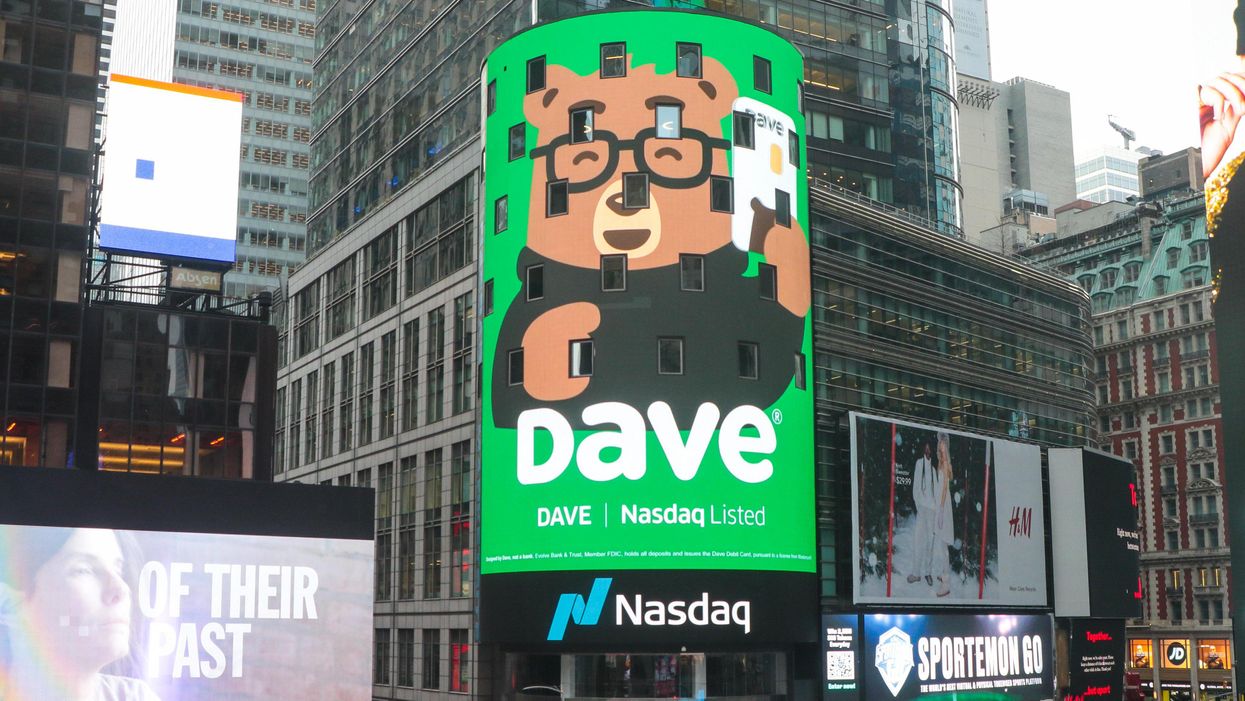 West Hollywood-based banking app Dave made its much-hyped debut as a publicly traded company on the Nasdaq stock exchange on Thursday.

Shares in Dave (ticker: DAVE) opened trading at $8.27, giving the company a market capitalization of roughly $3 billion. After swooning close to $7 per share, Dave’s stock rebounded above the $9 mark before closing the day at $8.53.

The fintech startup, which is notably backed by famed billionaire investor Mark Cuban, wrapped up its merger with a special purpose acquisition company (SPAC) sponsored by Chicago-based investment firm Victory Park Capital on Wednesday. The company is expected to raise up to $465 million in capital as a result of the merger, and is looking to use the proceeds to further grow its business—including a potential foray into crypto.

Dave founder and CEO Jason Wilk told dot.LA that part of the reason the company decided to go public was because he had personally grown weary of “the distraction of having to raise private capital.”

“We had a lot of interest in the private market, but we really thought to go public—and give the everyday retail investor the chance to invest in the company and grow with us—was a really good opportunity,” he said. “It makes it easier for us to raise more capital as a public company. Of course, there are some headaches of being a public business, but access to capital is far easier.”

Dave is among a wave of fintech startups aiming to disrupt the retail banking sector with low-fee, digitally-enabled banking services. The firm launched in 2017 as a financial planning app to help customers avoid the billions of dollars in overdraft fees charged annually by traditional banks.

It has since grown its offerings to include a checking account, and now has 11 million customers who use its services for banking, overdraft protection, building credit and finding side-gigs. Dave estimates that it has helped customers avoid nearly $1 billion in overdraft fees to date through its flagship feature, ExtraCash, and earn over $200 million in income through its gig-economy job board, Side Hustle.

As part of the IPO, Wilk and several other Dave executives rang the Nasdaq’s opening bell on Thursday—though the ceremony actually took place in L.A. several days ago, and not in New York City on the day of the company’s market debut.

Because of COVID-19 protocols and social distancing restrictions, the stock exchange shipped a duplicate podium to Dave’s old offices in the Mid-Wilshire district. The podium arrived from San Francisco, where it is occasionally used for bell-ringing ceremonies involving Silicon Valley tech firms.

Though Dave moved its headquarters in October to the Pacific Design Center in West Hollywood, Wilk and the other executives pre-recorded the opening bell ceremony in their old digs on Tuesday. “It was really cool to ring the bell in the place where we used to pump out code with just a few of us sitting around a desk or a coffee table,” Wilk said.

Dave is not the only L.A.-based neo-bank that has looked to go public via a SPAC merger. Marina del Rey-based Aspiration, which offers banking services with an environmentally-conscious angle, is pursuing a similar route and aims to make its market debut by the end of March.