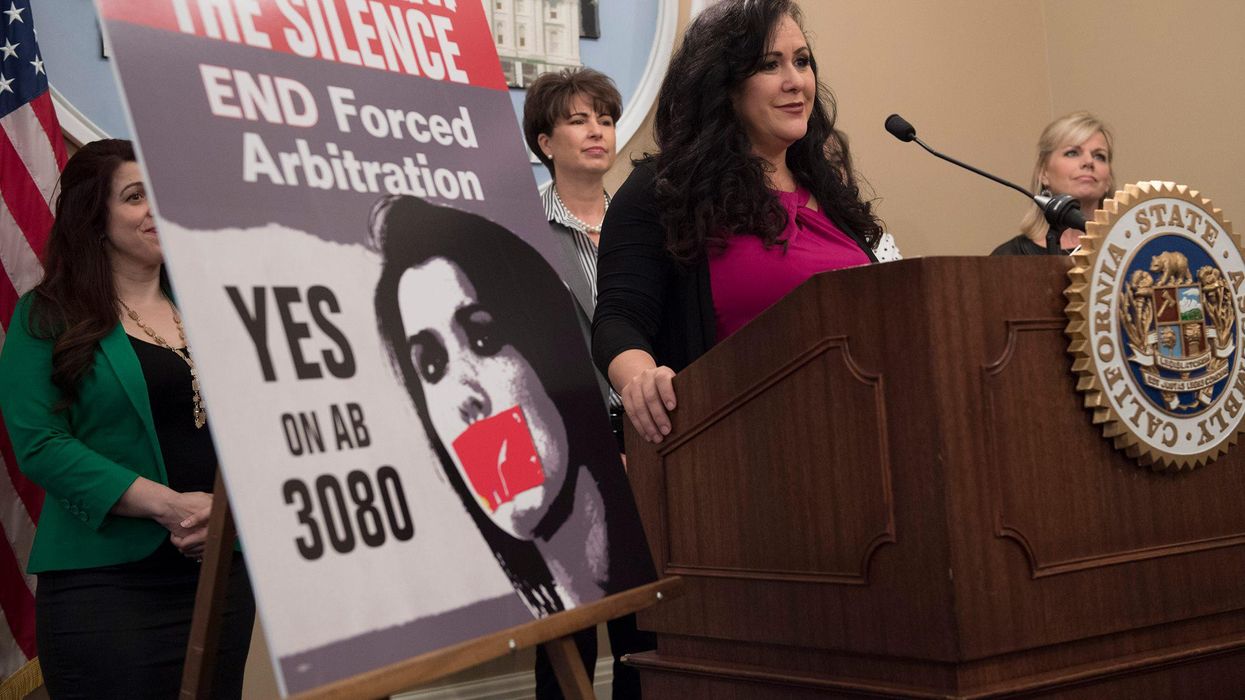 On Wednesday, California Gov. Gavin Newsom signed into law a bill that targets Amazon's surveillance of warehouse employees. Earlier this month, another bill appeared on his desk, this one allowing restaurants to provide customers an itemized breakdown of the fees charged by delivery apps.

Both bills aim to take on Big Tech. And both were authored by Lorena Gonzalez.

The Democrat and assemblywoman from San Diego has emerged as one of the California legislature's fiercest critics of Silicon Valley's giants.

All three bills threaten not only to change how these tech giants do business, but cut into their bottom line.

Gonzalez knows that tech companies feel victimized by her office. AB 286, her bill providing the itemized fee breakdown, is her latest salvo against them. The legislation would ensure delivery services pay the entire gratuity to their drivers, following a lawsuit alleging that DoorDash had stolen drivers' tips.

"We've been asked a lot, 'Why are you picking on us?'" she said. "But I just want people to remember that transparency in transactions is always good. We don't allow people to sell you something and not point out the taxes on it. We don't allow you to buy a car without knowing the add-in. So it's normal for us to look at transactions that have been kept secret, that keep the consumer from making educated decisions, we tackled that and that's what we're trying to do here."

Although a permanent cap on delivery fees failed to make it into the final version of AB 286, the bill still provides enforcement mechanisms to ensure workers receive their tips. It also allows the attorney general, city attorneys or district attorneys to pursue a civil court case, while another complementary bill says an employer can go to jail for stealing tips, Gonzalez told dot.LA.

"It's putting it in the penal code but it's also ensuring that adding into the discussion of what is a wage, it includes tips for independent contractors," she said. "So I think those bills together will make people think twice."

The bill Newsom just signed would require Amazon and other companies to reveal details of the quota systems they use to ramp up productivity in their warehouses.

At Amazon warehouses, workers have blamed the pressure to meet demands on unsafe working conditions and high injury rates. And a 2019 investigation by The Verge showed that Amazon had fired hundreds of workers at a single fulfillment center in one year for failing to meet productivity quotas.

For Gonzalez, a former labor leader who has turned her enemies' anti-union smears into badges of honor, her battle for gig workers' benefits follows over two decades of organizing. She unionized workers at Tri-City Medical Center in Oceanside, where her mother once worked long hours, and was banned from all Wal-Mart stores following a demonstration demanding higher pay.

Her latest fight temporarily sidelined her from the Capitol: she was diagnosed with breast cancer in early August and underwent a bilateral mastectomy weeks later, announcing on September 13 that she was cancer-free.

Her work as an assemblywoman has earned her both a national reputation as a progressive darling—and detractors within her state's business community, including Rachel Michelin, head of the California Retailers Association.

"She's been very vocal about who she's targeting, similar to what she did with AB 5," Michelin said. "She goes after a few companies but sets out this large net and it has unintended consequences."

Michelin who called the bill "overly broad": also took umbrage at Gonzalez's political style, noting that the assemblywoman prefers to take to social media—where she once tweeted "F*ck Elon Musk"—rather than come to the table with the state's business interests groups.

"She responded to some of our comments online through our digital campaign, but not directly to me or any of our coalition partners," Michelin said.

California Assemblyman Alex Lee, who represents the Silicon Valley area, co-authored the bill aimed at delivery fees with Gonzalez. The young politician has known her since his time as a legislative staffer in Sacramento and decided to team up with Gonzalez after he heard similar complaints from his restaurateur constituents about delivery apps.

A self-described "Gen Z-er," Lee not only takes little offense when Gonzalez pops off on Twitter, he applauds it.

"She's an absolute fierce champion for the working class," he said. "There are other politicians who see themselves as great dealmakers, Lorena's more like, 'How do I get the most for working people?'"

As a former gig worker himself, Lee said he knows how AB 5 revolutionized the tech industry for those who labor in what he describes as "new serfdom."

At the same time, he points to the impact the legislation made on his peers from college, many of whom worked in contracted positions at Google, Facebook and Apple. While their white-collar jobs offered a lucrative salary, the companies didn't offer full-time benefits.

"For our generation, organized labor is like a foreign concept now. Just getting money in the bank is so important that you'll forgo dental and health insurance," Lee said.

"That's why big things like AB 5 and what Lorena does are so important. We are in this race to the bottom and it's not just the stereotypical person who works in the factory, it's people who have white collar jobs in offices, they're all in the same boat and that's why her work is so profound."