Meet the Cousins Behind Netflix’s New Foray Into Gaming 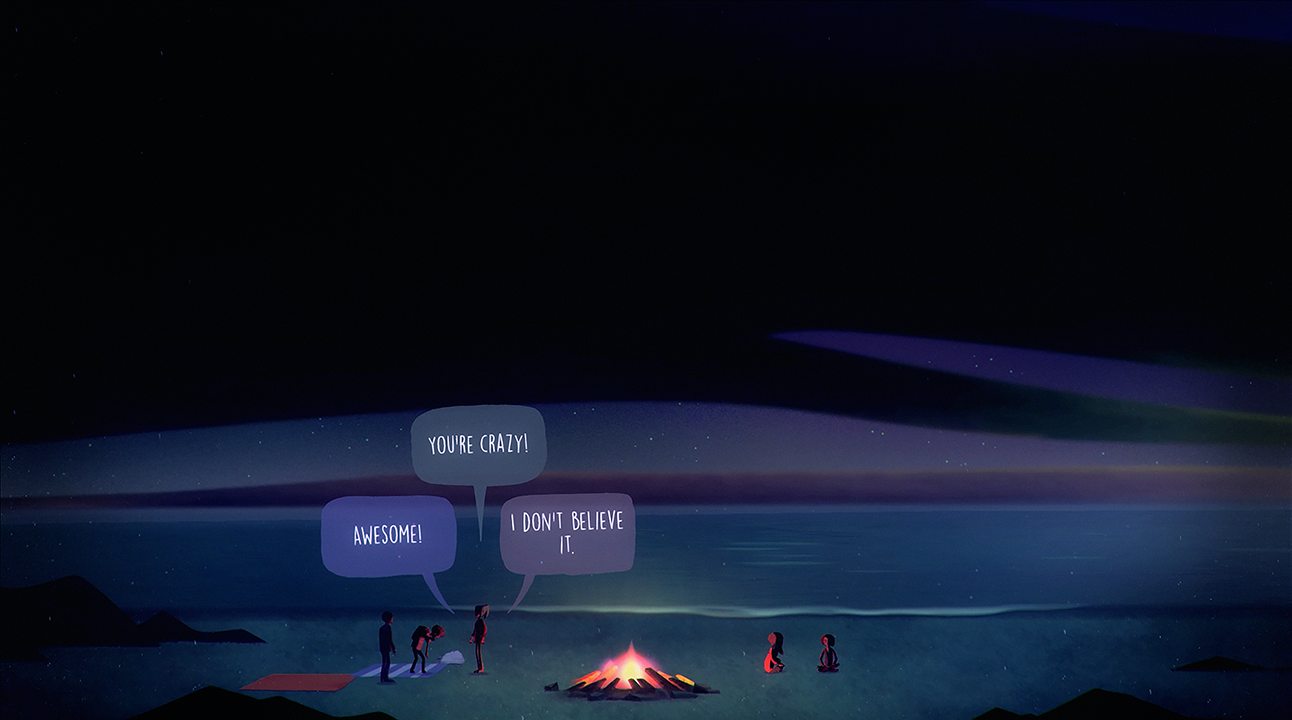 Netflix’s newest gaming studio started more than seven years ago when Sean Krankel got laid off from Disney.

Krankel worked in design at Disney Interactive and Vivendi Universal Games. While his cousin and friend Adam Hines wrote at the storied adventure game developer Telltale Games on projects like “The Wolf Among Us” and “Tales from the Borderlands.”

Both were looking for something new, and when Krankel lost his job, they decided to create Night School, a Glendale-based studio that would try to do things with storytelling that other studios hadn’t.

Krankel took on the role of CEO, while Hines became creative director. They brought in gaming veterans Heather Gross as the art lead and Bryant Cannon as lead developer.

The through-line for Night School is story: elevating player choice in much the same way the studios they share a lineage with did. The studio puts the focus on the messy, complicated and overlapping ways a story is communicated through dialogue, whether between unique quirky characters, or occasionally, the game and the player themselves. That also extends to how the studio’s team members work with each other to this day. The approach attracted Netflix, which acquired them for an undisclosed amount in September.

Neither Krankel nor the other staff members contacted for this piece could go into detail about Night School’s new position at Netflix either. But the move hasn’t changed their conversational dynamic. “People should constantly be talking,” Krankel said. “If you think you’re talking too much: you’re still not talking enough.”

That dialogue-first philosophy was evident in Night School’s first game, 2016’s “Oxenfree.” A supernatural thriller set on a local tourist trap island, “Oxenfree” makes good on Hines and Krankel’s early ideas by featuring a near-constant stream of conversation. You play Alex, a teenage girl trying to adapt to big changes in her life. What’s supposed to be one night of teenage mischief turns into an increasingly unsettling series of encounters with ghosts trying to communicate from beyond. The main crux of the game, aside from solving puzzles with a handheld radio, is navigating conversations from the thousands upon thousands of words Hines wrote for the game’s script. You choose one of three possible text bubbles at junctures in each conversation, slightly adjusting the story as it goes along.

The biggest challenge making that happen, according to Krankel, was “building the tools that would empower our designers to make the game while we were making the game.” Communication became key (along with proper documentation of all the design decisions that were made).

“Oxenfree,” available on Windows, MacOS, Xbox One and Nintendo Switch, was a surprise hit. Night School declined to share current sales numbers, but previously announced that the game had sold 1.5 million copies between 2016 and 2019. “Oxenfree” also cleaned up with the critics and the studio’s peers, winning “Excellence in Visual Art” at the Independent Games Festival Awards in 2016, and scoring a nomination for “Best Debut” and “Best Narrative” at the Game Developers Choice Awards in 2017.

“Oxenfree is a smartly written coming-of-age mystery that holds promise for the future of dialogue-as-game.” Polygon wrote when they named the game one of the best of the last decade. That promise has borne out.

Night School Studio has since grown to 24 full-time employees and released four games, with a fifth on the way. And things could soon get even more busy: In September, Netflix announced it had acquired the company, marking the streaming giant’s first foray into gaming.

“The deep narrative and graphical adventure nature of Oxenfree could translate well to video,” he said. 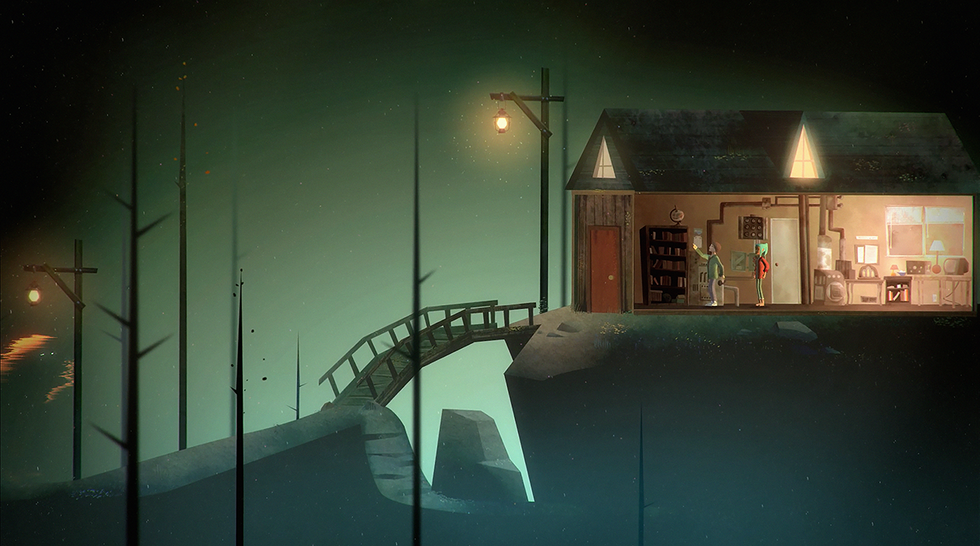 How Night School Came to Netflix

In some ways, the Netflix deal might have been born out of Night School’s relationship with another TV giant.

The immediate follow-up to “Oxenfree,” “Mr. Robot: 1.51exfiltrati0n,” also came out in 2016. A mobile game adapted from USA Network’s hit hacker drama, “Mr. Robot: 1.51exfiltrati0n” places the player into the story, rather than having them play as someone else. Using a fake phone operating system and messaging app, Night School adapted earlier ideas it had for a dating game to tell a story asynchronously across multiple days in the lead-up to the world-altering hack that happens at the end of “Mr. Robot”’s first season. The game is a departure from the studio’s style, but in a way, an even better example of its idea about conversation and dialogue — without a dynamic art style, having intriguing conversations became the whole game.

“Mr. Robot: 1.51exfiltrati0n” allowed Night School to collaborate with the show’s creator Sam Esmail, and brought the studio in contact with Hines’ former employer, Telltale Games. Night School reportedly worked on a companion “Stranger Things” mobile game to accompany Telltale’s own project in the years that followed. In the arrangement, Telltale acted as both publisher and liaison between Night School and Netflix. When Telltale Games went under in 2018, Night School’s work with Netflix’s hit show ended. Still, both the “Mr. Robot” and “Stranger Things” projects proved that the studio was able to work with existing properties.

It may have also put Night School on Netflix’s radar. Krankel contends that Night School was in conversation with Netflix about various projects six or seven months before the Netflix deal came about. “I don’t even know if they knew that we were making a Stranger Things game,” Krankel told “Game Informer” following the acquisition.

Serendipity or not, the match makes sense. Netflix and Night School have some important opinions in common. Existing interactive Netflix projects like “Bandersnatch” or even “Minecraft: Story Mode” (a Telltale game playable on Netflix) put the focus on player choice. Night School has also produced plenty of world-building right within the wheelhouse of Netflix’s most popular genre properties. An interest in the supernatural and the interior lives of young adults are just two reasons why the creators of “Oxenfree” might have felt comfortable making a “Stranger Things” game (and maybe making another one again down the road).

Night School announced its current project in April 2021. The studio plans to return to the game it made its name on with a sequel called “Oxenfree II: Lost Signals.” The follow-up focuses on an entirely new set of characters, loosely tied to the first, and carries over the distinctive walk-and-talk dialogue and radio mechanics.

Whether “Oxenfree II” eventually shows up as part of Netflix Games – free playable mobile games available with just a Netflix subscription, managed inside the Netflix app –– remains to be seen. Night School has developed for mobile before and even released console titles like “Oxenfree” on iOS. (Netflix did not respond to a request for comment on its plans for Night School, or the studio’s existing titles.)

In the short term, Night School’s community director Sara Hebert says development is continuing on “Oxenfree II” uninterrupted, just as Night School promised when both companies announced they were joining forces. “Everything is indeed so new and it’s only been a few short weeks,” Hebert shared via email. “Day-to-day, our studio remains focused on creating great games and maintaining our studio culture.”

Ultimately, working with Netflix is an opportunity for a small studio to get its games in front of the streaming service’s millions of subscribers. Netflix offers “an unprecedented canvas to create and deliver excellent entertainment to millions of people,” Krankel said in his announcement of the acquisition. Now Night School just has to keep building.