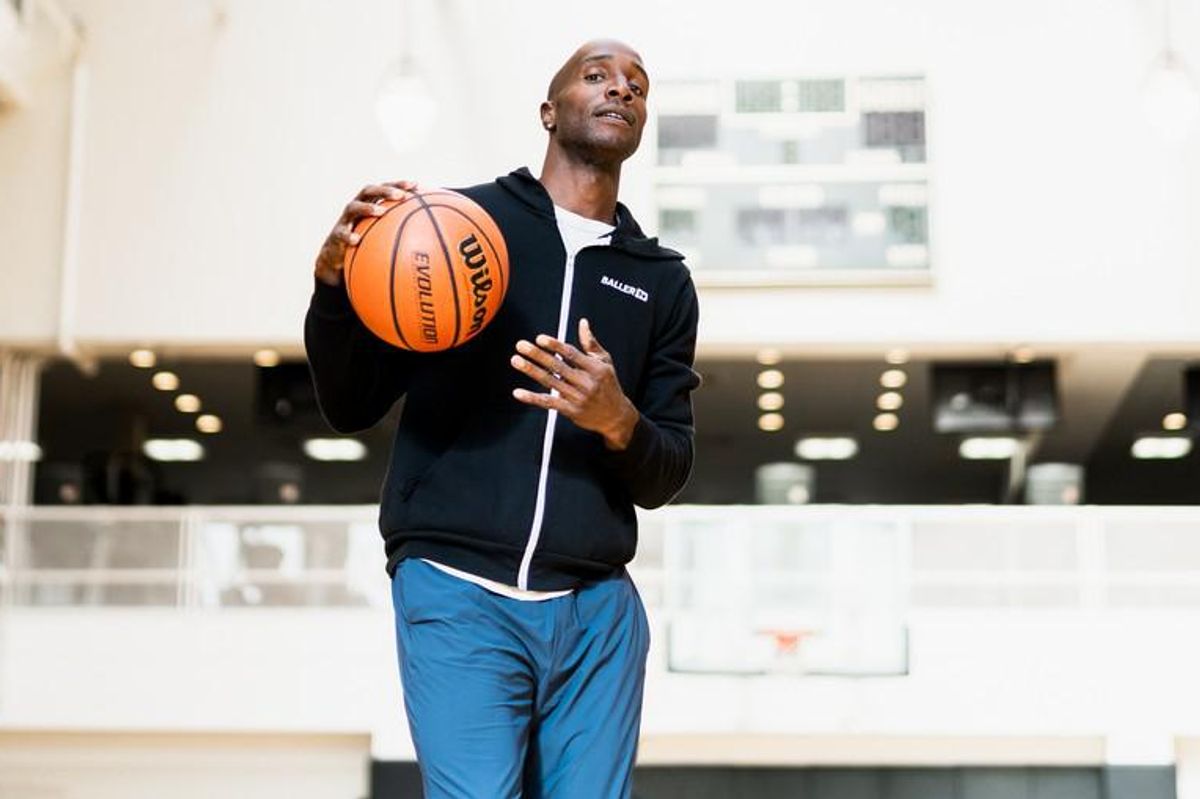 If you stop by Koreatown’s Immanuel Presbyterian Church on Sundays, you might run into Kavodel Ohiomoba pushing a broom across a basketball court hidden on an upper floor of the cavernous historic French Gothic cathedral. It’s a favorite movie backdrop for Hollywood films.

On a Bose portable speaker, you also might hear rapper Polo G’s mellow-sounding “RAPSTAR” echoing off of the mid-century gymnasium’s walls: “Lately, I’ve been prayin’, God, I wonder, can you hear me? Thinkin’ ’bout the old me, I swear I miss you dearly.”

The six-foot, four-inch tall Ohiomoba, known as “Kav”, gets the gym tidied up before the first game starts at 9 a.m. sharp. The “run,” or freewheeling run-and-gun basketball game with connections drawn together by Kav, came together this past summer as the pandemic began to subside and vaccines were readily available to all. He got the idea of using pickup basketball as a way to network with the tech community from Jeff Jordan, partner at A16Z, who runs a famous pickup game in Palo Alto.

Kav is chief technology officer of BallerTV, the Pasadena-based streaming sports company that livestreams youth sporting events at scale, and is currently focused on basketball, volleyball, soccer and lacrosse.

Before BallerTV, the Stanford alum put in work at a few tech startups in the Silicon Valley, including MOCAP Analytics, where he was a member of the founding team as a data scientist and software engineer. The MOCAP team leveraged machine learning and computer vision to build a data storytelling engine on top of the player tracking data that was quickly being adopted by NBA teams.

“The opportunities were truly endless,” Kav said. “We were building models that told us which players and teams did what, where, how and when.”

As advances in computer vision — and later, machine learning and artificial intelligence — introduced new possibilities for sports viewing, Kav sought to bring broadcasting and video to athletes who weren’t being streamed on ESPN or major television outlets. Not long after, he co-founded FieldVision, which built hardware and software using artificial intelligence and computer vision to autonomously film any team sport, anywhere. 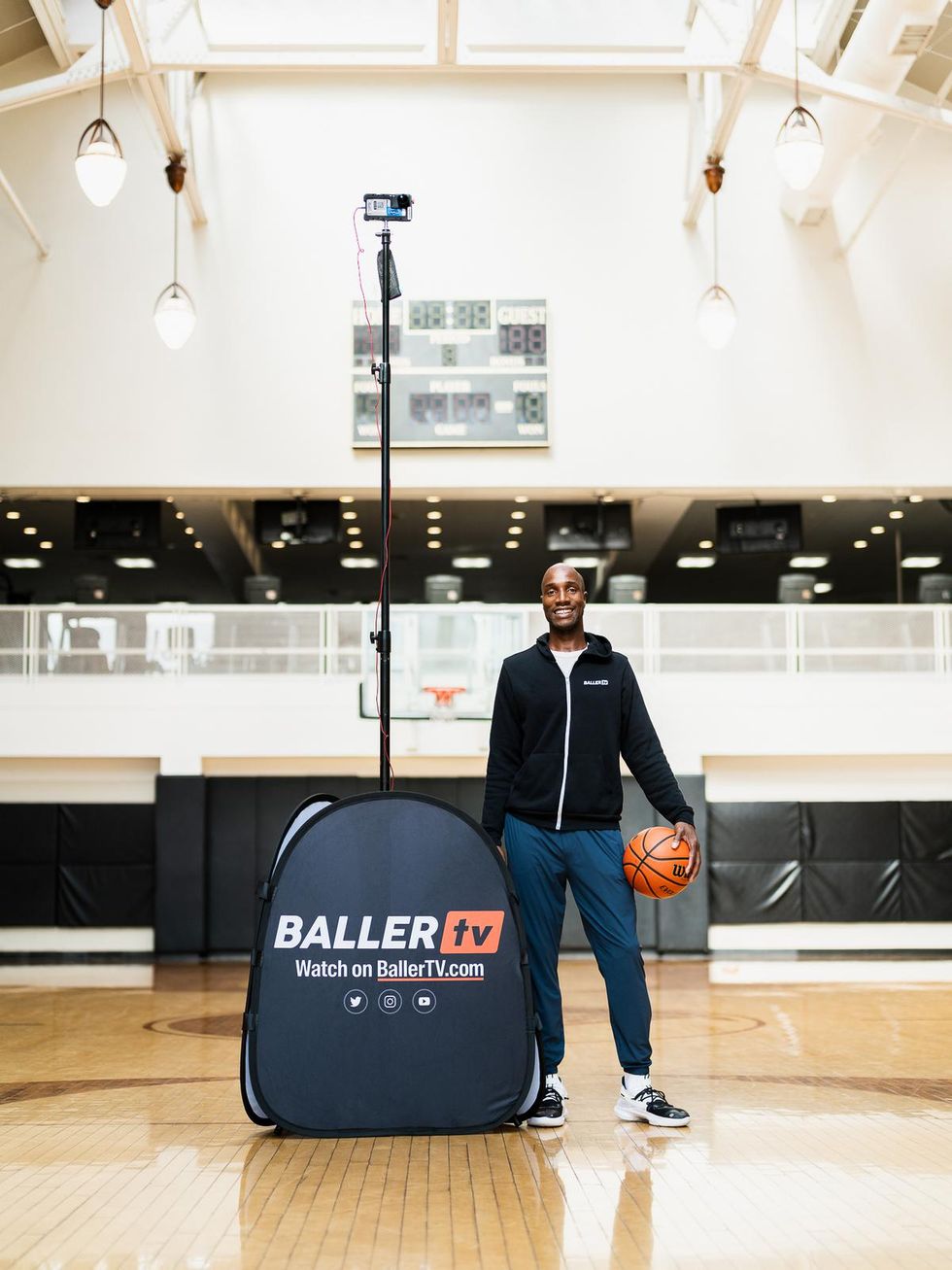 FieldVision came into the BallerTV fold via acquisition about two years ago, and proved to be a slam-dunk for the company. Since its launch in 2016, BallerTV had relied on an army of 30,000 videographers throughout the United States to film youth athletic games ranging from basketball to volleyball.

Kav spearheaded the effort to take FieldVision’s machine learning — fueled by artificial intelligence algorithms — and put it all into an iPhone app. After a few months, the i1 platform was born. The platform uses an iPhone rigged up with a wide-angle lens and its software tracks players on the court, ball movement and shifts in a fast-moving game. The game is then broadcast live to BallerTV’s rapidly growing network of subscribers, allowing anyone with an internet connection to watch as if they were sitting courtside at the game.

Kav says there’s a bigger purpose behind his basketball runs. The group is diverse and inclusive, with participants coming from all parts of L.A. and a variety of professions. The basketball games serve as a form of connection between people, regardless of their backgrounds.

Some runs have included BallerTV’s co-founder and co-CEO Aaron Hawkey, nicknamed “15 and in,” mostly because he’s money from within 15-feet of the basket; Marcus Boyd, a former professional track and field athlete turned software engineer; John Daniels, founder and CEO of Navtrac, a logistics technology company that utilizes artificial intelligence software to track inventory, and Tommer Schwarz, a doctoral candidate in genetics at UCLA.

“I’m an old man. I did not injure myself last weekend, but I missed several layups in spectacular fashion,” said the 40-year-old Paul Haaga, managing director of HW Capital in Santa Monica, of his performance one weekend in October.

Haaga’s firm was an early investor in BallerTV, as well as a number of other early-stage companies and real estate deals.

“It’s interesting, if you see guys enough on several Sunday mornings in a row, you get to know who they are as people on the basketball court, and that’s probably a pretty good indicator of who they are in life. Do they play fair? Do they play hard? Do they compete? It’s a good indicator of someone’s qualities, and if they have relationships outside of the game, then that’s all the better,” said Haaga, who makes the 14-mile drive in from his La Cañada residence. 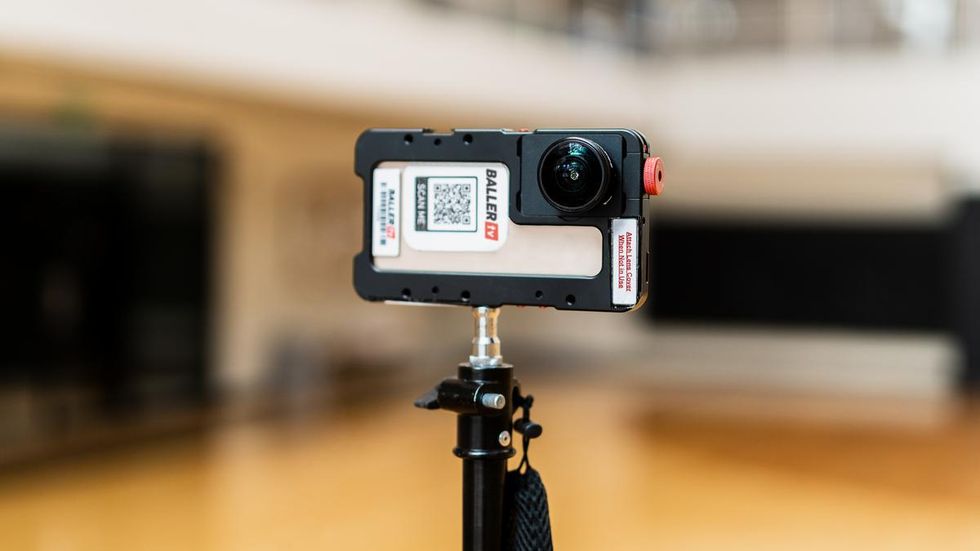 And few reveal who they are quite like Kav, who attends to the runs as he would a group of his close friends.

“There is no job that is below [Kav], whether it’s dusting the floor before we get there, or making sure that everybody’s hydrated with Gatorade. He’s always thinking about your health, right? Everything is sugar-free,” observed Ryan Sauter, an entrepreneur in the hospitality industry whose Hybrid One is headquartered in downtown’s Arts District.

Sauter’s highlight of the week is when he gets the weekly email from Kav asking 60 other like-minded people on the distribution list if they’re in or not for the weekly pick up at the church.

“I definitely look forward to that email, which comes Wednesday or Thursday,” Sauter said. “It kind of brightens your day a bit because you’re like, ‘Hey, I can’t wait until Sunday to play with everybody.”

After breaking a sweat at the church, Kav and the others head over for some chit-chat and a cup of joe at the Starbucks or Blue Bottle Coffee near the K-Town church. Even grabbing a post-run cup of coffee is a welcome respite in a time where people are trying to be connected more than ever.

“We’re coming out of COVID, and that’s how this evolved,” Kav said. “We were itching to meet each other. And of course, I think we were all itching to get back out on the court.”