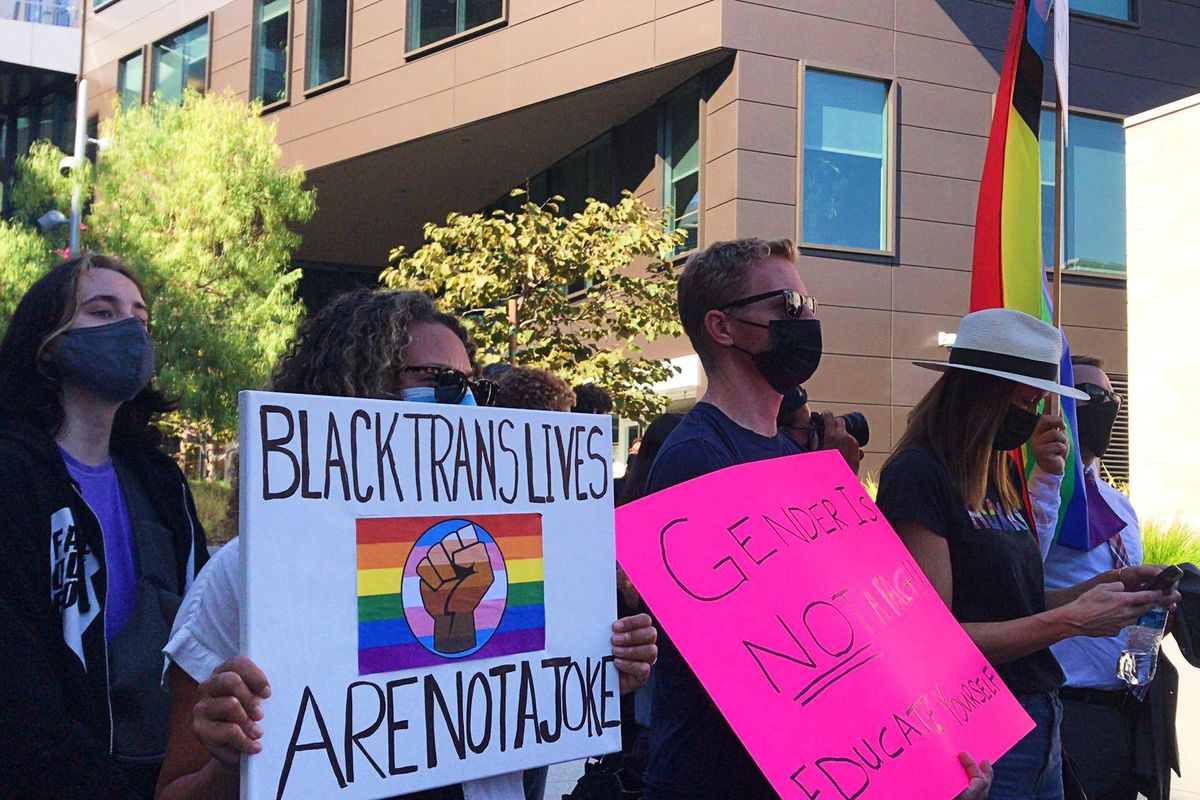 Dozens of Netflix employees and LGBTQ supporters walked out of the streaming giant's offices in Hollywood this morning in protest of comedian Dave Chappelle's incendiary new special "The Closer." They were met by a group of Chappelle supporters who carried signs like "jokes are funny" and things quickly turned tense.

At one point, a pro-Chappelle protester shoving his way towards a microphone the activists supporting the Netflix employees had set up was pushed back and there was a brief tussle before several pro-trans activists stood in the way. One of the activists threatened, "I will beat you down." The protester backed off but shortly afterwards got into another confrontation with a pro-trans rally attendee, almost knocking them over before exiting the area. 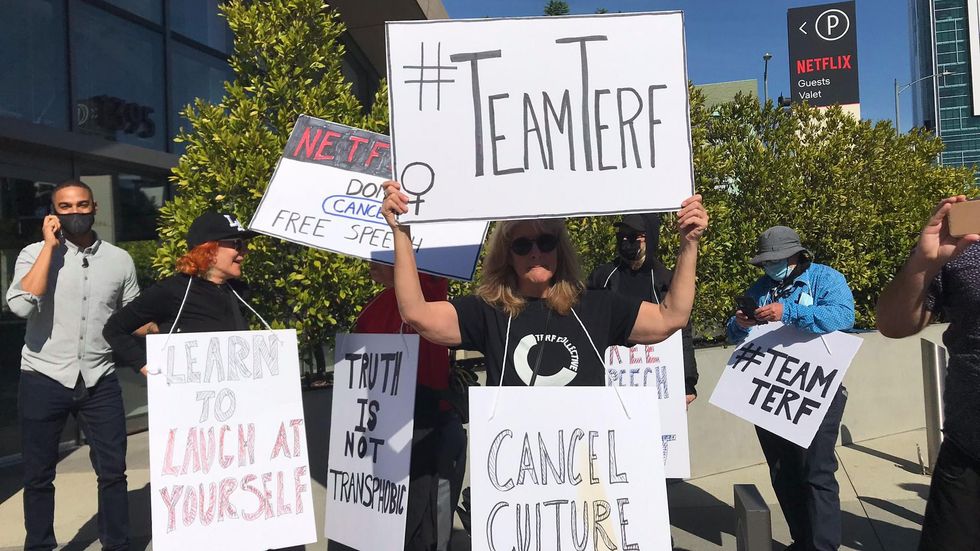 Counter-protesters showed up at the walkout.Photo by Samson Amore

Chappelle's special debuted on Netflix Oct. 5, and the internal battle at Netflix has been raging since. Several Netflix employees declined to go on the record out of fear of retaliation.

B. Pagels-Minor, a former Netflix programmer and Black, trans and nonbinary person who is 33-weeks pregnant, was one of the original organizers of the walkout alongside transgender activist Ashlee Marie Preston.

Pagels-Minor said they were fired Oct. 14 after being accused of leaking private financial information to Bloomberg. Pagels-Minor denies involvement in the leak and told dot.LA they were fired roughly two and a half hours after the walkout was announced.

"How can you have transphobic content and not have counter-content that specifically shows trans lives," Pagels-Minor questioned. "Like most people, I didn't think it was very funny," Pagels-Minor added. "I'm a black trans person, and Dave Chappelle seems to think those people don't exist."

The walkout organizers' demands include creating a new fund for investing in transgender talent, revising internal policies to determine what content on the streamer is "harmful," and hire more transgender executives. 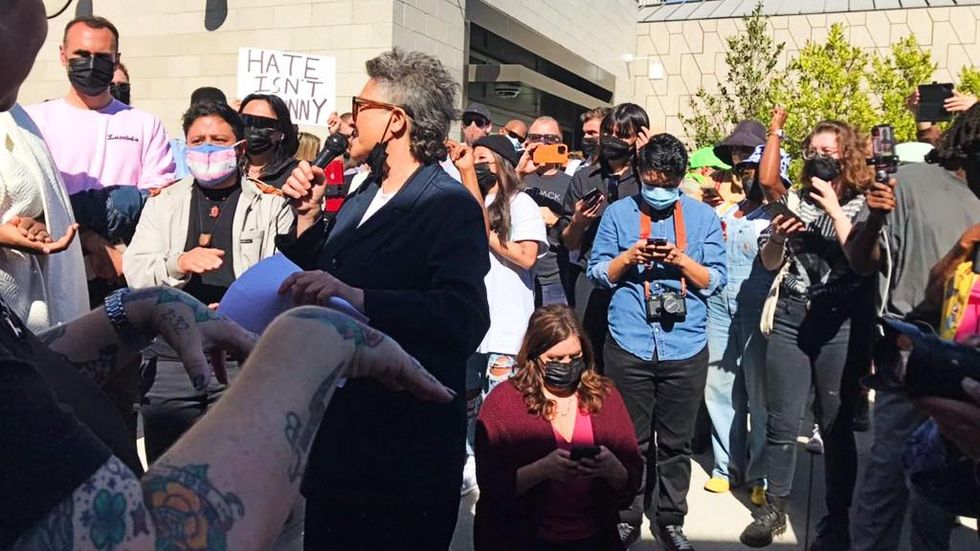 Netflix has social media accounts to promote its LGBTQ+ storytelling that posts under the handle Most. Ahead of the protest, it tweeted: "brb walking out."

"Trans people are in a Holocaust. But trans people are also out here dreaming of safety, dreaming of time, which is a privilege… time to imagine, create, to write their stories," said Joey Soloway, a showrunner for Amazon's Emmy Award-winning series "Transparent" who attended the rally. "The line is simple: Stop making things worse."

In his new show, Chappelle called himself "Team TERF" (Trans-exclusionary radical feminism), a term that's used for people who, among other things, don't believe transgender women are women. "TERF" is a term that's also been used to describe "Harry Potter" author J.K. Rowling, whose own anti-transgender missives have caused a stir in recent years. Chappelle was keen to align himself with Rowling in "The Closer" and spent a sizeable portion of his special arguing against transgender people's right to exist, claiming sex and gender are "a fact."

The backlash on social media to Chappelle's comments was swift. Netflix's "Dear White People" showrunner (and transgender woman) Jaclyn Moore tweeted the day after "The Closer" aired that she was leaving the company. "I will not work with them as long as they continue to put out and profit from blatantly and dangerously transphobic content," Moore said. Several other Netflix employees have vocally opposed the special on social media.

LGBTQ advocacy group GLAAD criticized the special after it aired and said, "Dave Chappelle's brand has become synonymous with ridiculing trans people and other marginalized communities."

Netflix has addressed the issue – CEO Ted Sarandos made it clear Netflix wouldn't drop "The Closer" from its platform since Chappelle is one of their top performers – and Variety reported last week Sarandos also said the streamer has "a strong belief that content on screen doesn't directly translate to real-world harm."

Chappelle's jokes have targeted transgender people before. Daphne Dornan, a transgender actress living in San Francisco, was the butt of Chappelle's jokes in his past special "Sticks and Stones" and again in "The Closer." Dornan, who was a comedian, died by suicide in October 2019 and left behind a young daughter.

Burbank City Councilmember Konstantin Anthony warned that Netflix's decisions could harm its larger ambitions and echoed support for a boycott.

Netflix recently inked a lease for a 170,000 square foot animation studio in Burbank. Anthony said he'd advocate for the company's transgender employees in the area.

"We don't need millions and millions of dollars backing those words," Anthony said at the rally.

This story has been updated to clarify how the tussle unfolded.