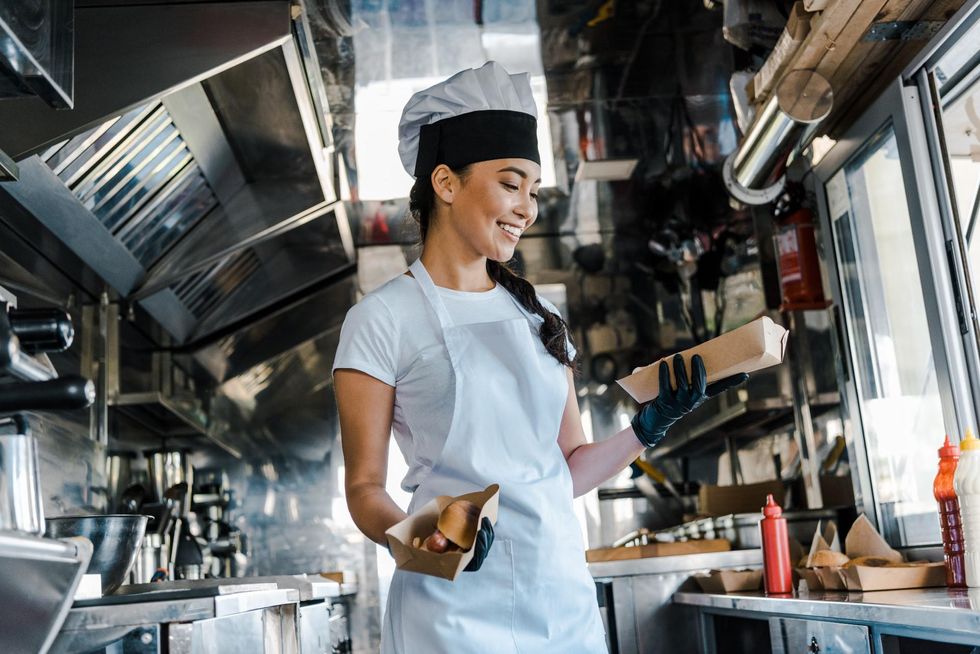 It’s a new day for South L.A. natives Gabriel Gamez and Enrique Loyola. The lifelong friends’ food tech startup, On The Go LA, recently celebrated its first anniversary, and with California finally re-opening, the entrepreneurs appear poised to leave a mark on the local gastronomy scene.

On The Go LA allows local food entrepreneurs to rent a food truck in just a few clicks for a daily fee of $299, or on longer plans that offer lower rates. The founders don’t take any of the trucks’ profits. Instead, they make money from the rental and optional add-ons, such as a cleaning service or a location scouter. In addition to managing a staff of four, Gamez and Loyola oversee the logistics, insurance, public relations and marketing.

The company’s goal is an ambitious one. Gamez specifically hopes to see On the Go LA to appeal to immigrant communities, whose members make up much of the back-of-house work force in the city’s restaurants. As Gamez sees it, his company can provide relatively inexpensive access to a kitchen for would-be food entrepreneurs hindered by the resources required to rent conventional restaurant space.

“We’re providing that flexibility and affordability and access to ownership for underrepresented communities,” he said. “Commercial kitchens are operating on high startup costs. That can really fete out a lot of communities in the L.A. area, especially in Latinx and African communities. We wanted to help those communities.” Already, he said, their two trucks have been rented by a mix of customers: local food entrepreneurs, chefs, catering companies, even a few brick and mortar restaurants looking to expand.

The idea came to Gamez and Loyola in early 2020, not long after both graduated from college and were talking about what they wanted to do with their lives. Food had long been part of their families’ history: Gamez’s Guatemalan father transported bananas across the country and into El Salvador; Loyola’s grandfather sold rotisserie chicken in Mexico. “We know how the other thinks,” said Gamez. “We’re basically brothers.”

After ironing out the kinks on their idea—the original concept centered around a “roaming ice cream truck model,” Gamez said, though they quickly settled on something a little less precarious—they were able to jumpstart their business with a $25,000 grant by PledgeLA to address racial inequity in the local tech scene.

The program provided a two-week accelerator program in January 2020 with virtual meetings, lectures, and mentorship to support the 20 Black and Latino entrepreneurs selected to participate. On The Go LA is also taking part in the LA2050 Grants Challenge, which awards prizes up to $100,000 to 25 organizations. Voting for the contest begins next week. (Gamez and Loyola invested more than $10,000 from their own savings at the start.)

In July 2020, right in the throes of a global pandemic, they officially launched. Though it’s been slow going, things appear to be picking up — especially now that Los Angeles officially has opened up. “We’ve seen a surge in interest,” Gamez said.

While food trucks have been a staple of L.A. for decades, they’ve taken a hit during the pandemic. “We would love to help revitalize the food industry,” Loyola said.

Given the pre-pandemic levels of growth the food truck sector had been experiencing before the pandemic — about 7.5% between 2016 and 2020, according to market research firm IbisWorld — there’s good reason to think that’s indeed a very attainable objective.

And investors are taking note.

“On The Go LA provides a short-term solution, which is so much more appropriate for restaurant owners who want to experiment in getting their brand out because it’s not a long-term commitment,” said Austin Clements, a partner at Slauson & Co., an early-stage venture capital firm.

Meanwhile, Gamez and Loyola have their eyes set on the future, with potential expansion into other cities on the horizon. “On The Go LA is part of a bigger dream for everyone involved,” said Gamez. “We want to empower people and lead a movement.”