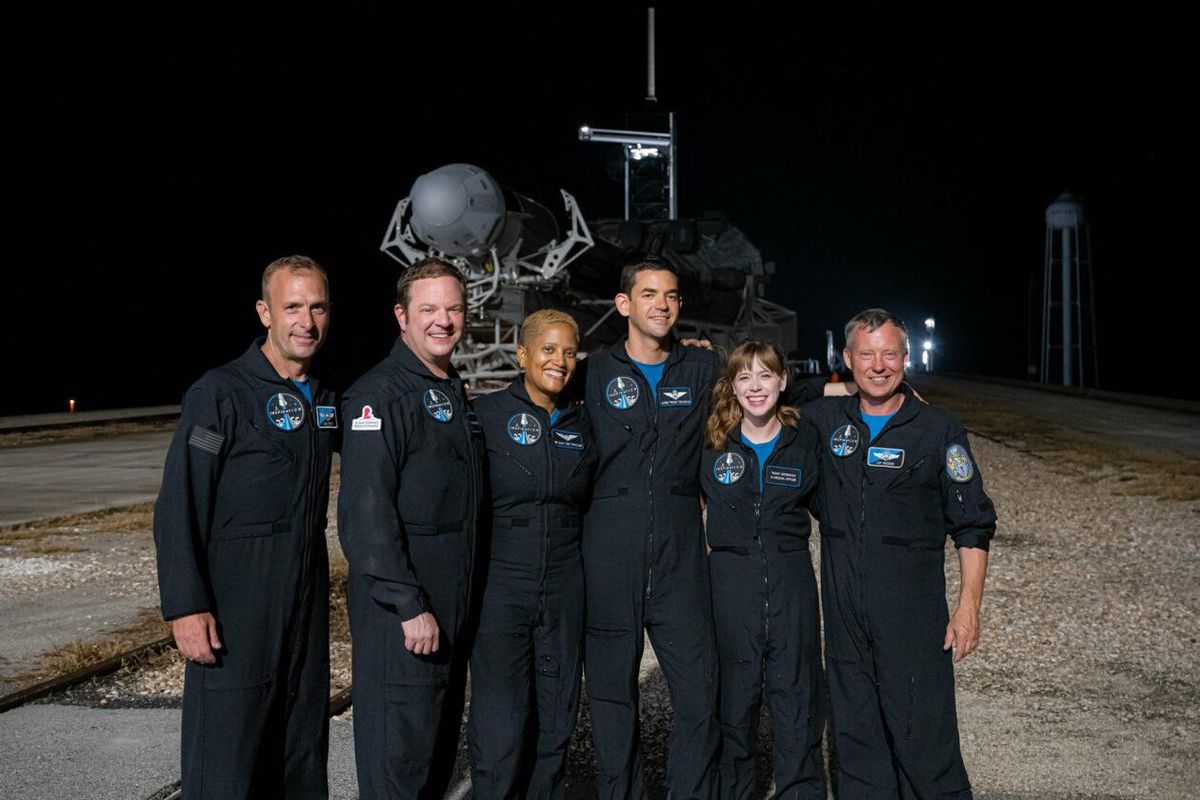 Are they space tourists? Citizen spacefliers? All-civilian astronauts? Whatever you call them, the four teammates who are due to go into orbit today in a SpaceX Crew Dragon capsule require creating a new category.

"I know there's controversy over what you should be called," retired NASA astronaut Scott Kelly told the foursome today in a tweet. "But when you strap into a rocket and launch into orbit, you can call yourself anything you want: astronot, astronut, astronaut — whatever."

There's Jared Isaacman, the billiionaire CEO of Shift4 Payments, who's paying for the launch and is the mission commander … Hayley Arceneaux, the 29-year-old cancer survivor who's due to become the youngest American to go into space … Sian Proctor, the professor and artist who'll back up Isaacman as America's first Black space pilot.

And then there's Chris Sembroski, a former Air Force missile technician and Lockheed Martin engineer from Everett, Wash. Sembroski got his chance to train for the mission and climb onboard the Dragon when an old college buddy of his won a charity sweepstakes — and then gave the reservation to him.

"I think that just really puts me in a very special spot, where not only do I feel very lucky to be here, but I have a huge responsibility to pay that forward," Sembroski said during a pre-launch briefing.

Liftoff atop a SpaceX Falcon 9 rocket is set for 8:02 p.m. ET (5:02 p.m. PT) from the historic Launch Complex 39A at NASA's Kennedy Space Center. But although the three-day Inspiration4 mission starts out from a NASA-owned facility, the space agency has minimal involvement.

This will be the first non-governmental crewed flight to orbit, and the first crewed SpaceX flight to pass up going to the International Space Station. Instead, the foursome will go into an orbit higher than the space station — higher than humans have flown since the space shuttle missions to the Hubble Space Telescope.

During the flight, Isaacman and his crew will conduct science experiments, teach classes from space and conduct auctions and other charity activities aimed at benefiting St. Jude Children's Research Hospital. Sembroski will even play a tune on his ukulele, although he admitted to "a little bit of stage fright." If all goes according to plan, the Dragon will descend to a splashdown in the Atlantic Ocean on Saturday.

Streaming coverage of the countdown, launch and in-space operations is due to begin about four hours before launch via SpaceX's website.

On one level, the Inspiration4 mission is a billionaire's attempt to turn the crew's personal space adventures into a fund-raising campaign for St. Jude. Isaacman's objective is to raise $200 million for the hospital, and he's already committed $100 million of his own money. That's on top of what he's paying SpaceX: Although Isaacman isn't saying how much the launch is costing, the fare is thought to be in excess of $100 million (but not as high as $200 million).

On another level, the first essentially non-governmental, "all-civilian" flight to orbit is meant to blaze a trail for wider access to space — not just by trained test pilots and other professional astronauts, but by regular folks.

And on yet another level, Inspiration4 could be seen as one more not-so-small step toward SpaceX CEO Elon Musk's vision of establishing beachheads for humanity on other worlds.

"This is the organization that is going to, in large part, get us to the moon, certainly with eyes toward Mars, right?" Isaacman said. "And there are a lot of risks on a six-month journey like that. So it's better to start taking some steps now, in a very well thought-out, mitigated way, so that we can continue to reach toward those extraordinary goals, like making life multiplanetary."

For all those reasons, one of Inspiration4's mission managers, Todd "Leif" Ericson, argues that the flight could mark the true beginning of a second space age. And Ericson isn't some starry-eyed space geek: He's a former Air Force test pilot who's also a veteran of Virgin Galactic's suborbital space program.

Ericson talked about the mission and its significance during an interview on the eve of the launch. Here's an edited transcript of the Q&A:

Ericson: "This mission is a great example of what a commercial entity like SpaceX is capable of doing on short notice. Dragon had never been higher than ISS, at about 420 kilometers, and we told them that for this mission, we want to do something significant. We want to start taking those first steps out toward becoming an interplanetary species — which means we've got to start working our way above low Earth orbit. They went through the analysis, and we were able to come up with an orbital altitude of 575 kilometers. That is the highest humans have been since, really, Apollo — save two missions, which are basically the shuttle's Hubble deployment and repair missions. That's a pretty significant thing.

"And then, SpaceX decided to create this cupola for viewing the Earth and deep space. The time from inception to flight-ready hardware was basically six months. Try to do that on a government contract!"

GeekWire: Were there any things that needed to be changed in terms of the training because this is a non-NASA mission?

Ericson: "That's a huge theme for everybody on this mission. We're building on the backs of giants. All that NASA has done is being leveraged for this. The training is as intensive as what any NASA crew would get for flying Dragon, but it's tailored to our mission. We're not going to the ISS, so there's no requirement for worrying about proximity operations or docking, but there are things like the cupola and mitigating the risks there."

GeekWire: Everybody wants to know how it's been for non-professional astronauts to go through that training, and what this portends for the future.

Ericson: "I've been very interested in that myself. I think this mission marks the dawn of what I'd call the second space age. It's the space age where space is accessible, no longer just for nation states, but for corporations and normal individuals. Up to this time, NASA has had the luxury of being able to hand-select the best of the best, physically and academically. But the next generation is going to require us to put up a lot more than the 600 people we've put in orbit over the last 50-plus years.

"You need to figure out how average people fare in space. What restrictions are really there? It's easy for a medical team to put in stringent requirements when you've got the world's population to pick from. But as you start opening that aperture and allowing more and more people to come, you surely can't be as selective. And I think there are also some interesting benefits when you start opening that aperture."

GeekWire: You get people with different perspectives.

Ericson: "Right. Up to this point, it's been a lot of test pilots, scientists and engineers. It's been a very left brain-focused thing. But from the perspective of benefiting humanity, how do we do this in a way that opens up other aspects that are less tangible? I think those aspects are equally important, and in some ways more important, to this goal of exploration and becoming an interplanetary species."

GeekWire: I wanted to ask about your own experience going through the mission — for example, being in a Netflix documentary series. I'm betting that's a bit more than you would have bargained for.

Ericson: "Here's what I think is so wonderful about this mission: It's the emphasis on St. Jude's. Jared has said many times that it's one thing to go to space and have the opportunity to do what he's doing. There are so many amazing things are going to happen because of that. But if we do that without remembering what's going on back here on Earth, we've missed the boat. Jared's 'bumper sticker' is, "Hey, if we can go to space, we need to be able to cure childhood cancer back here on Earth and take care of some of these other problems.'

"I think that's what's been so cool about being part of this: the outward focus. Jared is not focusing this on himself. He doesn't want to, because he recognizes that's not the important part. You know, with the flights of Sir Richard Branson and Jeff Bezos, there's been this focus on 'billionaires in space.' And there's been kind of a negative connotation to that. I hope that the Netflix documentary highlights the fact that this is really about much more than just four people going into space. If you look back at the history of humankind, we've only advanced because we've taken the time and the capital to go beyond where we've gone before.

"Space exploration is expensive, right? Initially, it's going to take people like Jared, who have the financial means to do so, to start pushing that envelope. Aviation is a great example. It initially followed a very similar course, right between World War I and World War II. The industry transitioned from being essentially the domain of government to finding civil applications. This thing that was a military instrument can now benefit humankind as a whole. That's where I think we're at with space travel right now.

"I applaud guys like Jared who are willing to take the resources that they've worked hard to obtain and put them toward something that will ultimately benefit all of humankind. I think it's a very noble endeavor, and I'd hate for that to get lost in the narrative. It's so easy to just chalk it up as a 'billionaire joyride to space,' and as you know, this is so much more than that.”

This story originally appeared on GeekWire.