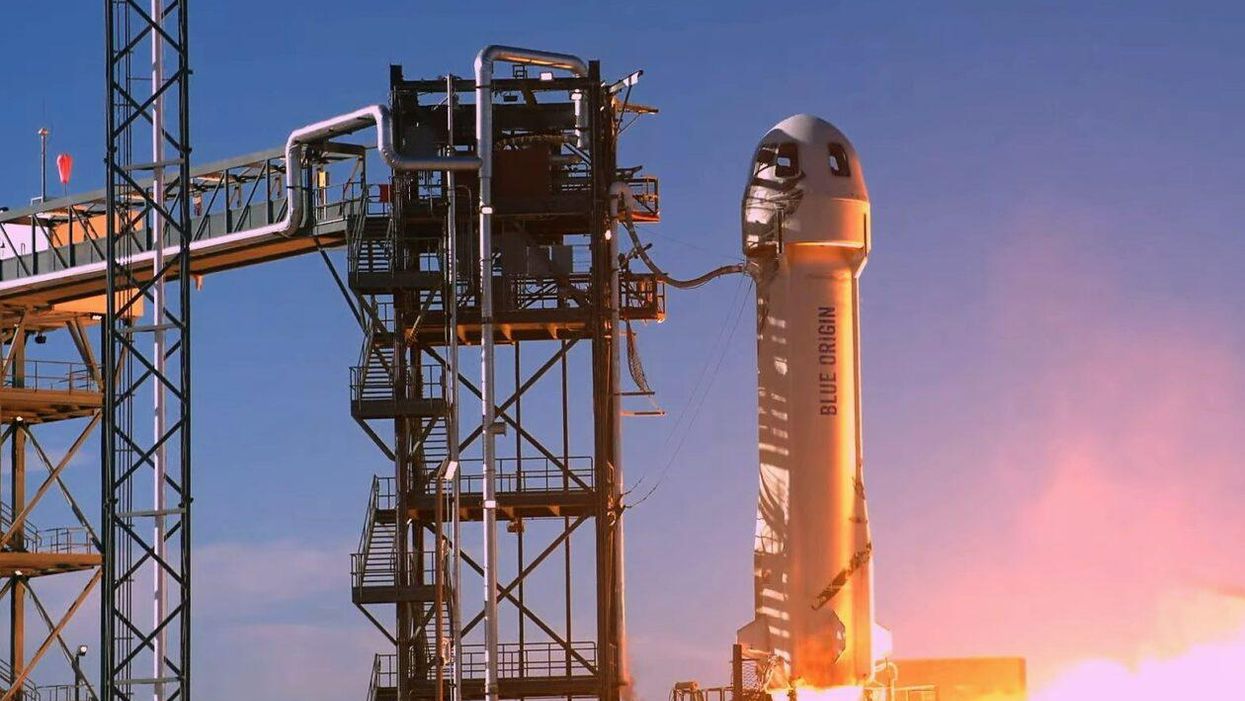 In the process, the 90-year-old Shatner took the title of oldest human in space, less than three months after 82-year-old aviation pioneer Wally Funk set that record on Blue Origin's first-ever crewed flight.

Today's mission at Blue Origin's Launch Site One in West Texas was the 18th for the New Shepard breed of spaceships, including 16 uncrewed flights over the past six years. It marked a bright day for Jeff Bezos' Kent, Wash.-based space venture, coming amid a set of challenges and controversies.

The flight followed the pattern set by July's milestone mission, which carried Funk, Bezos, his brother Mark and Dutch student Oliver Daemen across the 100-kilometer (62-mile) space boundary known as the Karman Line.

Boshuizen and de Vries paid an undisclosed fare for their trip, while Shatner and Powers flew on Blue Origin's behalf.

While the booster flew itself to a touchdown on a landing pad not far from the launch pad, the four space travelers returned to their seats for a parachute-aided descent back to the Texas desert. The trip took 10 minutes and 17 seconds. 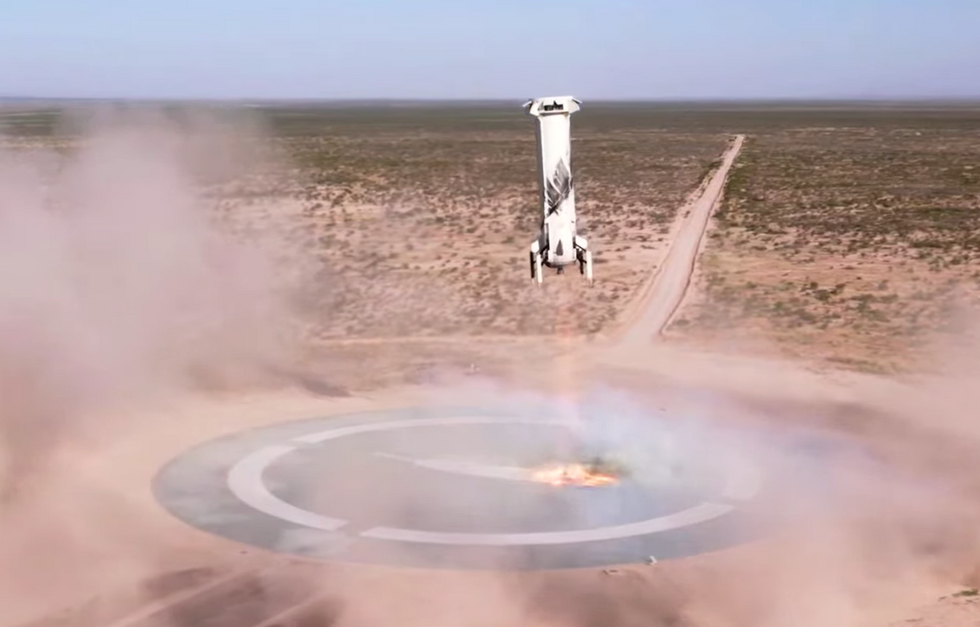 The crew capsule sits at its landing site.

After the landing, Bezos opened the hatch and ushered the crew out for a round of hugs from friends and family — and a spray of celebratory champagne.

"Everybody in the world needs to do this," Shatner told Bezos as he stood outside the capsule. "It was unbelievable. … To see the blue colors just whip by, and now you're staring into blackness. … There is Mother Earth and comfort, and there is space. Is there death? I don't know.

"What you've given me is the most profound experience I can imagine," said Shatner, seemingly overcome. "I'm so filled with emotion about what just happened. It's so extraordinary. I hope I never recover from this."

Bezos then gave each of the fliers a custom-made astronaut pin and a hug. Thousands of postcards were packed aboard the capsule for the Club for the Future, Blue Origin's nonprofit educational program, and they'll be returned to senders now that they've come back from space.

Shatner was the star of today's mission, thanks to his long-running status as a space-show celebrity. He was the starship captain in the original "Star Trek" series in 1966-1969, in an age before his three shipmates were born, and went on to roles in a string of Star Trek movies as well as non-spacey films and TV series. 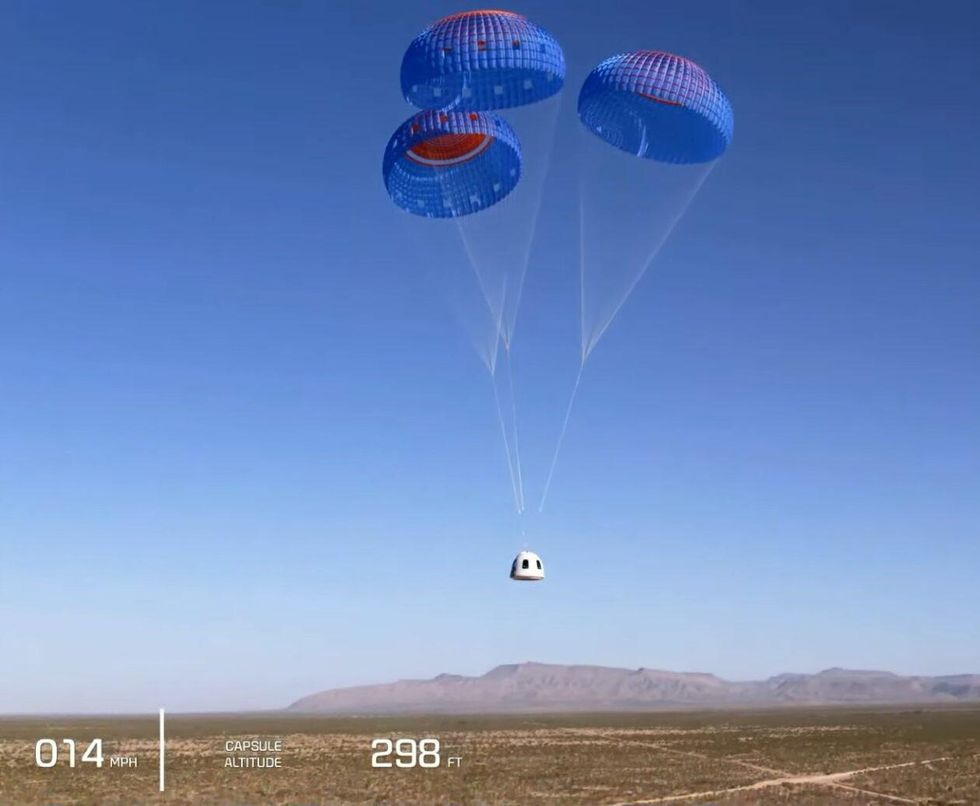 The New Shepard crew capsule descends to its touchdown.

He's also served as a pitchman for Priceline, and at times, Shatner sounded as if he was playing that role in an unofficial capacity for Bezos and his space vision. "Jeff Bezos' concept to make living and building in space, and to make pollution a thing of the past — what noble ambitions those are, and somebody has to start it," he said in a pre-launch video released by Blue Origin.

So far, New Shepard seems to be the most successful element of Blue Origin's multi-pronged space program. After July's first crewed mission, Bezos said that his 21-year-old space venture had racked up nearly $100 million in private sales for future suborbital spaceflights. The next crewed flight is expected to take place late this year, and there'll be uncrewed research missions as well.

Blue Origin has faced setbacks on other fronts, including delays in the development of its next-generation BE-4 rocket engine and its orbital-class New Glenn rocket. This spring, it lost out to SpaceX in a multibillion-dollar competition to build the first lunar lander to carry astronauts for NASA's Artemis moon program. A ruling on Blue Origin's legal challenge is expected next month. 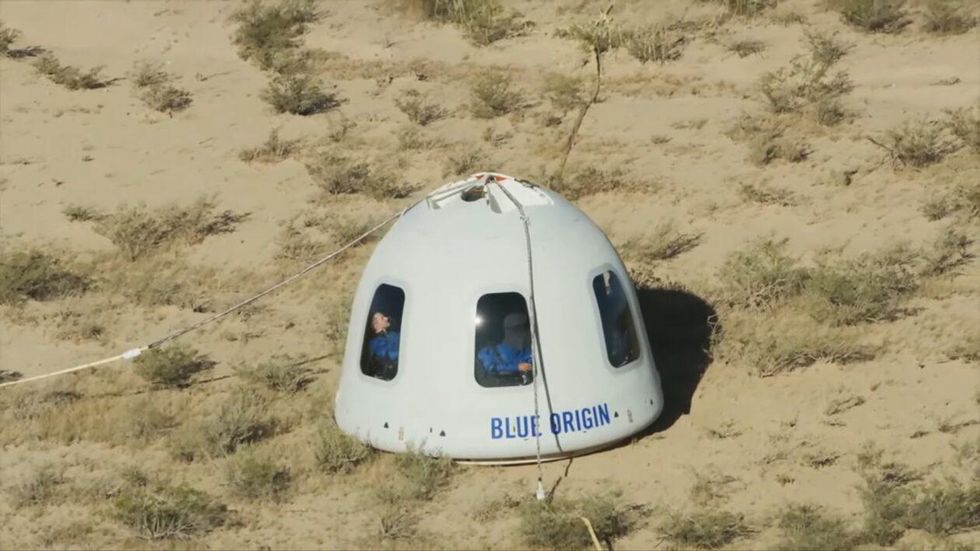 The crew capsule sits at its landing site.

There have been signs of internal dissension as well: Last month, an essay attributed to 21 current and former Blue Origin employees accused the company of laxity when it comes to sexual harassment and flight safety.

According to the essay, most of the authors "would not fly on a Blue Origin vehicle" due to safety concerns. Perhaps in response to the essay, today's Blue Origin webcast made a point of emphasizing the safety of the New Shepard system.

"There are a lot of people at Blue that would be excited to fly on New Shepard, and I'm happy to count myself as one of them. It's a fantastic system. It's a very robust system," Andrew Lake, senior director of New Shepard safety and mission assurance, said in a pre-recorded interview.

"Well, I hope we get to go one day," replied Ariane Cornell, who doubles as a launch commentator as well as Blue Origin's director of astronaut and orbital sales.

This article originally appeared on GeekWire.