The Pandemic Forced a ‘Hard Reset’ On Public Transit. New Funding Could Change It Permanently 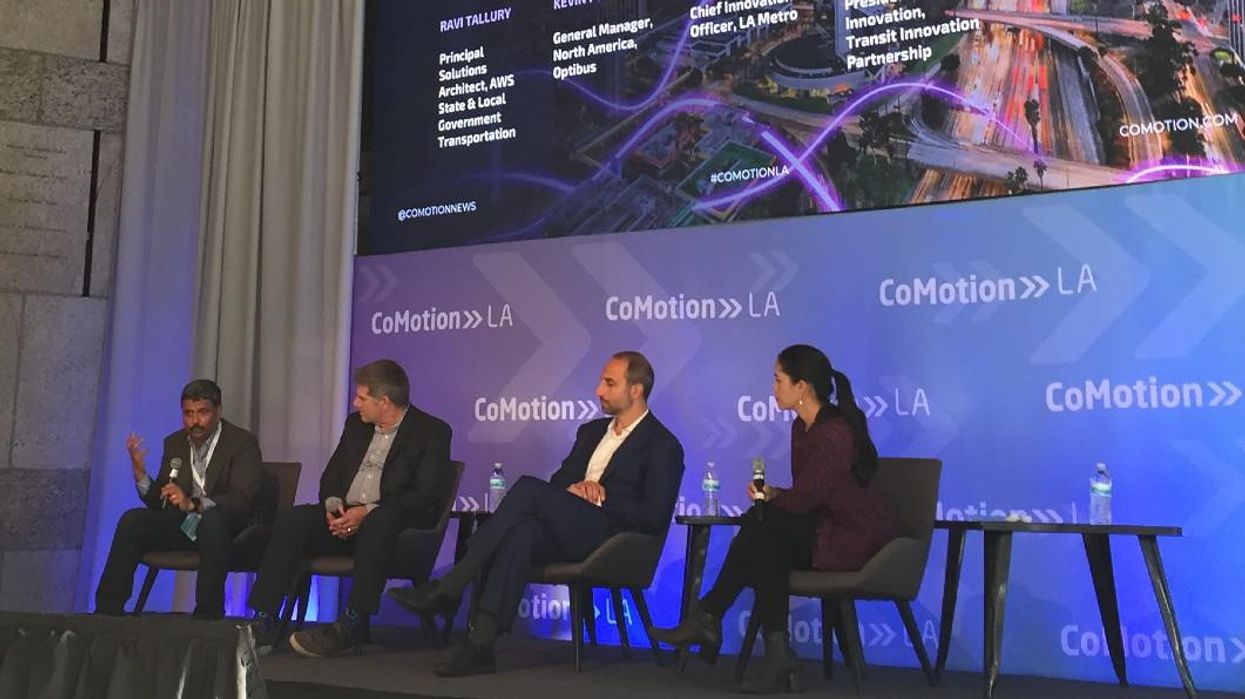 During the pandemic, ridership on L.A. Metro dropped drastically, a reported 70%.

COIVD-19 irrevocably changed the face of public transit and the habits of its passengers. As agencies like Metro L.A. were forced to adapt, technology played a role in making long overdue changes to entrenched systems.

Kevin Foreman, Optibus general manager for North America, compared it to going on a diet where you come out healthier on the other side.

Foreman’s remarks came from a panel of public transit agencies and partners called “Get on the Bus: Rethinking Post-Pandemic Transit” at the three-day CoMotion conference on mobility and technology happening at the Japanese American National Museum in Little Tokyo.

During the COVID crisis, many agencies adopted cloud-based technologies such as AWS (Amazon Web Services) to process transportation data and respond swiftly to shifting patterns in ridership.

The pandemic also spurred a workforce crisis, with the loss of 55,000 transit drivers in North America alone. Foreman stressed the need to adopt schedules that appeal to drivers as well as riders.

“Especially with the infrastructure bill coming in, I think our transit agency customers will be flooded with cash. Now we need people to actually drive buses,” said Foreman.

“Don’t start with the technology. Start with a problem you’re trying to solve.”

Since it was founded in 2015, Metro’s Office of Extraordinary Innovation has received over 250 unsolicited proposals from private, nonprofit and academic organizations seeking to help Metro reach its goals.

“Things that get rejected are typically things where people are very excited about the technology and haven’t thought through what it is that it will actually accomplish for our business model and for our customers.”

Schank emphasized the benefits of public/ private partnership. Private sector companies not only bring technology and innovation, they also take on some of the risk of investing in new transit infrastructure and services.

One example of such a partnership is Metro Micro, a micro-transit service currently operating in eight zones in Los Angeles, with a ninth zone scheduled to launch December 12 in Westwood. The service offers on-demand shared rides to users within a fixed zone for $1 per ride.

The project came about through an unsolicited proposal from private sector partner RideCo. “We were getting eaten alive by alternative services,” said Shank. But Metro saw an opening to provide lower-cost mobility on-demand for underserved populations that were not being targeted by Uber or Lyft.

“Our role is to make sure that people aren’t getting completely stampeded by the capitalist system we live in, and ensuring that we’re helping the people who need the help the most, making sure we don’t completely destroy the planet,” Schank said.

He added that the pandemic provided a hard reset not just for Metro but also for the average person and that Metro is hoping to seize the moment to introduce shifts more radical than using cloud-based technology to optimize bus schedules or providing on-demand mobility services.

“I’m sure you’ve all experienced this where, before the pandemic, you’re just like, ‘yeah, we go to work every day and we travel around and we’re maniacs, and that’s just how life is’. And then now we’re all like, ‘oh, maybe we don’t have to do that all the time’.”

If people can rethink commuting to work everyday, maybe they can also rethink driving alone to get there — or get out of single occupancy vehicles altogether.

Metro is currently conducting a congestion pricing study. But it’s also piloting a program to reward people for not driving.