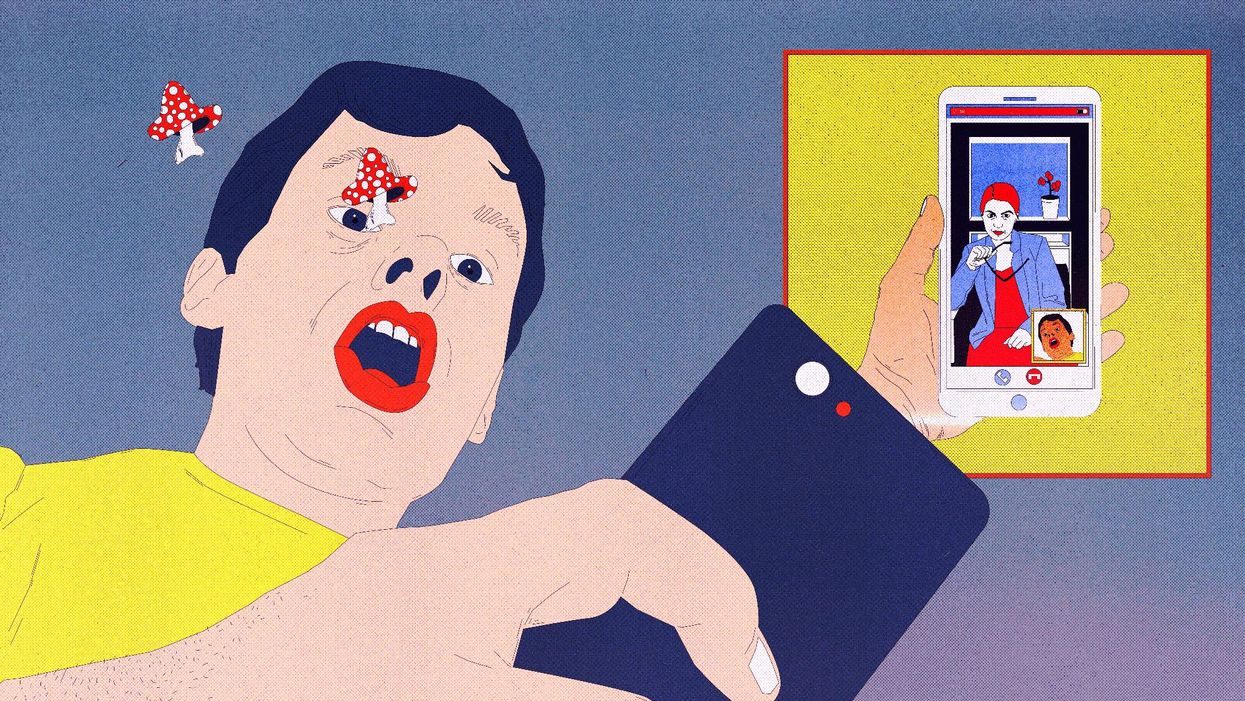 Seven years ago, Mark Carnessale was diagnosed with oral cancer. He spent weeks in radiation therapy, losing his appetite and any semblance of a healthy sleep schedule. All night he would lay awake in his home in Burbank, gripped by fears about his own mortality.

Carnessale couldn't shake that anxiety, even after the cancer went into remission. He tried therapy and antidepressants, but neither did the trick; the fear of dying still clung to his brain.

He came across a Johns Hopkins study about magic mushrooms' ability to lower anxiety for cancer patients with a life-threatening diagnosis. It was a drug he had taken before — small doses in the 1970s that made him giggle. In 2014, at the age of 56, he was apprehensive to try it, but he was also desperate. So, he joined a group of seasoned and novice psilocybin users in Telluride, Colorado and, under the watchful eye of his wife, took around 5 grams of psilocybin, the naturally occurring substance found in mushrooms, provided by the group.

The results were better than he could have imagined.

He felt his ego melt away, along with it his anxieties. His wife told him she's never seen him happier.

"The psilocybin helped me more than anything," Carnessale said. "That has been the one saving grace for me."

Experiences like Carnessale's are becoming more common as medical professions slowly come around to psilocybin as a form of treatment for a host of mental issues. For the past seven decades, doctors have primarily relied on antidepressants — also known as Selective Serotonin Reuptake Inhibitors, or SSRIs — to treat depression. But it takes about six weeks before SSRIs will successfully increase serotonin levels in the brain (which is associated with well-being and happiness), and the pills can cause a slew of undesirable side effects including weight change and insomnia. (Carnessale tried SSRIs in the past but found they numbed his feelings.) Psilocybin, on the other hand, works within hours, and carries very few long-term side effects.

"SSRIs work for some people, but for a lot of people, it's just not a realistic option," said Wesley Ryan, an addiction psychiatrist in Marina Del Rey who has done research on pairing therapy with a variety of drugs, including psychedelics. "I suspect there's clear advantages to the use of psilocybin to treat depression."

Now, with the Food and Drug Administration granting psilocybin a "Breakthrough Therapy designation (a label which fast-tracks the development and review process for drugs), and the California State Senate approving a bill this month to decriminalize a number of psychedelics, a handful of startups are popping up in Los Angeles to take advantage of potential new medicines that could revolutionize therapy for anyone dealing with depression or PTSD.

Wake Network, for example, is experimenting with psilocybin-based therapeutics, also known as psychedelic therapy. Prior to the pandemic, the three-year-old, Culver City-based startup hosted two psychedelic retreats in Jamaica for people clinically diagnosed with PTSD, depression or anxiety, where each participant took a dose of psilocybin and went through guided group therapy sessions. If and when legalized, Wake Network plans on conducting those sessions in the U.S. and Canada.

Another psilocybin startup, NANA, aims to guide people through psychedelic experiences with therapists trained to use psychedelics. Psychoactives are only 20% of the equation," said NANA founder Maria Florencia Bollini. "They have to be paired with counseling and lifestyle modifications."

But the brave new world of psychedelic therapeutics comes with some drawbacks. Ryan pointed out that people can experience deeply delusional or paranoid thoughts on psilocybin, which could put themselves and others at risk. In a 2016 study, 10.7% of participants who took psilocybin self-reported they put themselves or others in danger. In order to lessen that risk, psychedelic drugs will likely require a monitoring period at a doctor's office or a clinic for a few hours after they're ingested. These logistics, and whether or not insurance will pay for the drugs, may very well price out low-income patients — a big problem, given the link between poverty and PTSD.

"The most severe forms of mood disorders, such as chronic TRD [treatment-resistant depression], are associated with significant economic impact on the lives of affected people, increasing the likelihood that they would be covered by public insurance," said John Krystal, chair of Yale's psychiatry department.

Still, Krystal sees a real benefit to the treatment. "Psychedelics have been used to help people gain insight into their existential struggles, such as helping people to cope with the impending ends of their lives and their search for personal fulfillment," he said.

"My impression is the risk of bad outcomes with psychedelics versus methamphetamine, cocaine, heroin, opioids, is way, way less," added Ryan.

More and more lawmakers would agree.

"The War on Drugs has failed us, and criminalizing these substances doesn't make anyone safer," said California State Senator Scott Wiener, who authored the bill to decriminalize psychedelics. "It's time to move away from failed drug criminalization policies and toward a science- and health-based approach."

And given that the psychedelic drug market is projected to become a $6.85 billion industry by 2027, it seems many others share the sentiment as well.

Carnessale, meanwhile, continues to travel to Telluride every few years to take psilocybin as a way to cleanse his anxieties. "You really take stock of your life when you're on psilocybin," he said. "You feel good about it."

Maybe in the future he won't have to go all the way to Colorado to get high.